When Intuition and Synchronicity Meet

Every now and again, I share some personal intuitive and/or synchronistic happening in the hopes that my sharing gets you to look at how those moments occur in your own life.

Most recently, I shared a moment that involved Tarot and a squirrel, and another that had the same Tarot card show up three times in a row—using three different decks, back-to-back.

Well, this morning, I had another one for the record books.

If you’ve been a reader of my blog for a length of time, you may know that, on occasion, I am prone to precognitive dreams. And, you may also know that it was a dream that helped bring Tarot into my life.

Not too long ago, I had a dream that brought another oracle into my life: the Lenormand (which you can read about here).

This morning, I woke from a dream in which I was conducting a reading using the Malpertuis Lenormand (a deck I own in waking life), specifically a pair of cards: the Whip + the Lilies. 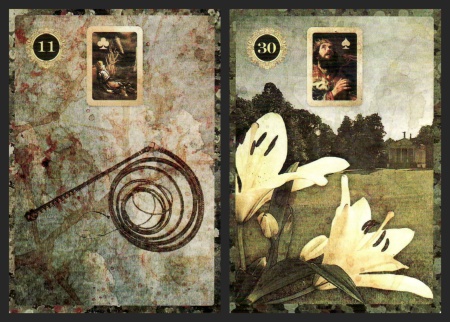 The Whip and the Lilies, from the Malpertuis Lenormand.

I got up and pulled a Tarot card for the day, as part of my daily practice. Using my deck of the month, the Night Sun Tarot, I pulled the High Priestess.

The High Priestess, from the Night Sun Tarot by Fabio Listrani.

The High Priestess is one of my favorite cards in the Tarot, as she is the Intuitive, the reader (both Tarot and otherwise), and the keeper of all metaphysical and esoteric knowledge.

I had a Tarot reading by e-mail to write up for a client “on the books” (the Priestess is holding an open book), so I knew, in part, the card was referencing that reading. But I also felt there was more. In my Tarot journal entry for the day (so far), I wrote down the dream I had featuring the Whip and the Lilies from the Lenormand.

After pulling my Tarot card of the day, I then pull three Lenormand cards as a daily draw, which is part of my practice in learning how to read the Lenormand. With the dream still fresh in my mind, I could have used the Malpertuis Lenormand, the deck that I was using in the dream.

Instead, I felt like using my Under the Roses Lenormand.

I pull three cards from the deck, facedown. I turn over the first—the Bear.

I turn over the second—the Lilies. My back straightens. The card gets my attention; part of the dream I just recorded in my Tarot journal is now staring me in the face.

I turn over the third—the Whip!

My daily draw, using the Under the Roses Lenormand: the Bear, the Lilies, and the Whip.

In that moment, I could feel everything fall away, becoming still, except for the vibrational humming in the atmosphere (Have you ever heard it—when everything becomes really, really quiet?). I was having one of those moments.

What are the odds—the chances—that two cards from a dream reading would show up in a daily draw—using another deck altogether, mind you—a few moments later?

Odds and chances apply to luck—but not in workings such as this. This is the stuff of intuition and synchronicity.

So what does it mean? For me, I feel it symbolizes a strong connection (the Bear is a card that can refer to something being strong) to the Lenormand is developing, as it reminds me of similar moments during the now 16 years I have been in this love affair with Tarot. In that time, Tarot has made many appearances in dreams, bringing me interpretations, layouts and spreads, and directives on how to read, both for myself and my clients.

Also, I believe the experience is letting me see the time gap narrowing between a precognitive event in a dream and its real-time, real world counterpart. In all the years I’ve had my precognitive experiences, this is by far the quickest turnaround as far as time goes.

As I stated at the beginning of this post, I share this story with you as an invitation to see how Spirit sends you signs and messages—and to notice the forms in which they come.