Dreaming of the Queen

The High Priestess, from Tarot Illuminati by Erik C. Dunne.

Earlier in the week, I presented the latest “Your Week in Tarot” reading, which featured The High Priestess card as the theme for the week.

One of the card’s chief messages is to honor our intuition, and I mentioned that we might want to consider paying special attention to any dreams we have this week, as dreams are one of the ways we receive intuitive guidance.

Previously, I’ve shared in this space some of the instances where a dream has had special significance in my life and set the stage for a waking life experience to follow.

This morning was another one of those days.

While in that state of leaving the dream world and re-entering this world (waking up), I saw the image of a playing card: the Queen of Spades.

It was the only thing I could recall for my time in the dream world.

I got out of bed and, walking into my consultation room, I noticed I left a deck of playing cards on the table where I conduct readings with my clients.

I remembered that I was going to write a post for the cartomancy column I have on my business blog, and I left the cards out as a reminder.

The deck is in a clear plastic case. It just so “happens” I put the cards in the case face up. What was the card on top looking at me through the case? That’s right—the Queen of Spades.

I had a nice little chuckle with the Universe. 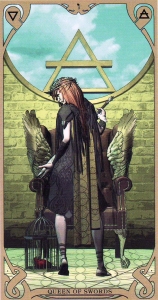 The Queen of Swords, from the Night Sun Tarot by Fabio Listrani.

I proceeded back to my bedroom to pull my Tarot and Lenormand cards for the day.

Sitting on the floor and taking my current deck for personal use, the Night Sun Tarot, in hand, I shuffled the cards. A card fell out from the deck, falling to the carpet, face up. I looked at the card. It was the Queen of Swords—the equivalent to the Queen of Spades.

I put the cards down. This moment is just like the moment when “Lennie” (the nickname some of us cartomancers have lovingly given to the Lenormand) showed me two cards in a dream and then presented them in my daily draw shortly after waking up.

The beauty about being a reader of cards is that they form a unique relationship with me—and allows me a spin on the cards based on that uniqueness. And that relationship has led me to see the similarities in the playing cards and the Minor Arcana of the Tarot (which are said to be related to one another).

I was led to this approach of integrating meanings of the cards from a dream I had shortly after getting my first deck of Tarot way back in 1999 (this month marked the 16th anniversary of that life-changing event). As you may recall, I had a dream in which I was reading playing cards that led to my picking up the Tarot.

Shortly after getting that first deck, I had this follow-up dream:

A dream about houses of cards taught me to integrate the meanings of playing cards and Tarot cards.

I am in a school. I walk into a classroom, which has a few students in it. The lights are off in the room because the students are watching a film or movie. To my right, on the floor, there is a large area that has houses of cards on it. I walk over to the area and begin to pick up the cards. As I gather them up, I realize I have two decks in my hands: one a deck of playing cards, and the other a deck of Tarot cards.

From that moment on, I knew that my approach to card reading (my study, based on the location of the dream being a school) would be an integration of both systems—unique to me (my picking up the cards).

But I’m digressing. The point of the post was to share yet another example of intuition and synchronicity—and how both work in my life.

And each time I do, the intention is to invite you to see how Spirit sends you signs and messages—and to notice the forms in which they come. And if you’re paying attention–how often these things happen.

For me, it happens to be in the form of dreams and cards—and lately, it seems to be an integration of both.

Fun fact: While in the shower this morning, I was thinking about this post and what to title it. The subject being the Queen of Spades, I suddenly heard the song “Dreaming of the Queen” by the Pet Shop Boys–and thought the title perfect.

Don’t know the song? You can give it a listen by checking out the video below:

That’s just how my intuition works! 🙂

2 Responses to Dreaming of the Queen