I recently consulted with “Lennie” (the Lenormand), asking what I needed to know about having a presence on Instagram.

My brother, JahSun, who is a gifted visual artist, has a great following on Instagram. Because of this, he began suggesting I create an account. I had some reservation, because I wasn’t sure if it was a good fit for my work. I also wasn’t sure if I even wanted to put in the time and energy in yet another social media platform, because, as we all know, it takes a while to create a presence and build a following no matter where you are these days.

After some prodding, I set up my account. And I can feel resistance coming up already, which is making the experience a frustrating one.

Since I have taken up the Lenormand, I look for any and all reasons to sit and consult the cards, as a way to get more experience working with “Lennie.” And I thought this would be a great opportunity to see what the cards might suggest about having a presence on Instagram.

“What do I need to know about creating a presence on Instagram?”

Using a layout called the Line of 5 (which is five cards in a row), I pulled the following: The Grave, The Mice, The Owls, The Moon, and The Ring.

My Line of 5 Reading about being on Instagram. From left to right: The Grave, The Mice, The Owls, The Moon, and The Ring, from the Under the Roses Lenormand. 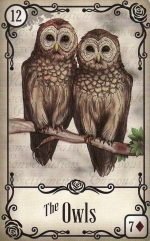 In a Line of 5, the third card is what is known as the focus card, and suggest what the situation centers on.

The focus card here, The Owls, can mean frustration, so it validates my feelings right now about the situation.

The Owls can also mean communication and conversation, and in this day and age of social media, The Owls (also known as The Birds) has been given the meaning of “tweeting” (associated with Twitter) and can therefore be linked to other forms of social media (The Owls stresses the “social” in social media).

In this regard, The Owls can suggest a level of superficiality with those communications as being nothing more than “chatter.”

Using a Lenormand technique called mirroring, or reflecting, I look at the pair of cards flanking The Owls as a combination to provide some in-depth information about the topic.

The Mice, a challenging card, can indicate something being diminished or lessened, as well as something that is causing worry and stress.

The Moon, unlike The Moon in Tarot, is a card of work and recognition; this card being in the line says this would be the purpose for my being on Instagram: gaining more recognition for the work I do.

The combination of Mice + Moon for me reads the stress and worry (Mice) of recognition, or being seen (Moon).

The Grave, another challenging card, can mean something coming to an end (and it’s the first card in the line!), that something is limiting or restricting, as well as nothing coming of things.

The Ring is a card of commitment, engagement, agreement, and a bond being formed.

For the combination of Grave + Ring, I come up with the following:

I consider the end of a commitment and the end of an agreement to be a reference to my brother, as I shared my frustration about Instagram with him, and he asked me to stick with it.

The first pair in the line represents what’s influencing the situation. Here, I have The Grave and The Mice—two challenging cards next to each other. I made the mental note that this didn’t bode well for starting something new. 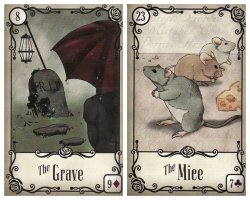 I read the pair of Grave + Mice as the stress and worry (Mice) of nothing happening (Grave).

I made this note in my journal for The Grave: this is dead from the start.

On a positive slant, I also noted that phrase “begin with the end in mind,” which would be to ask myself what the end result would be by having a presence on Instagram.

I see The Moon as saying this will be “work,” and The Ring as engagement will go in cycles. 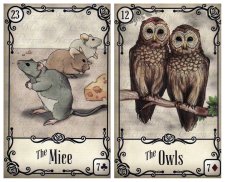 I pair Mice + Owls and see this as stress and frustration, as well as the worry and stress about what to “say”—what do I talk (post) about?

I combine Owls + Moon for the answer: talk (Owls) about my work (Moon).

Combining Grave + Owls, I read as talking (Owls) about nothing (Grave); the phrase made me think about Seinfeld, which was dubbed a show about “nothing.”

And, while all the pairings offer information, the process of stringing the cards together to create a sentence, can be just as valuable, in terms of insight.

Reading the cards, from left-to-right in a forward narration, I come up with “Limit (Grave) the amount of stress (Mice) and frustration (Owls) as you work (Moon) to create engagement (Ring).”

The Rider is a card that represents news and messages being on its way; he delivers the information.

Being the first card in the deck can suggest new things and novelty, which can suggest I may stick with Instagram until its novelty wears off—if it catches on (remember The Grave?).

One of the features I really like about the Lenormand is that some decks have playing card inserts. Since my journey into divination began with a dream featuring playing cards, this aspect of “Lennie” is like bringing things full circle, so I make a point to use these inserts.

Adding up the numbers from the playing cards (9 + 7 + 7 + 8 + 1) gives me the total for the Clarification card, which is 32. Card 32 is The Moon, which appears in the line reading, again highlighting the aspects of recognition (being seen) and my work, which is also my vocation.

From the perspective of cartomancy, I see there are a pair of 7 playing cards (7 of Clubs and 7 of Diamonds). The 7 in cartomancy represents communication—and the dissemination of it, which brings me back to the questions of “What do I want to say?” (communication) and “Where can I best say it?” (platform to disseminate those communications)

One black 7 (Clubs) and one red 7 (Diamonds) can indicate worries—again a meaning associated with both The Mice and The Owls. Another way of repeating the message.

The 8 of Hearts, the playing card insert on The Moon (look in the lower right of the card) gave me some final advice in my reading about being on Instagram.

The final thing I felt (intuition) inclined to do was to look at the playing card insert of The Moon, my Clarification card, for any final advice. The card is the 8 of Hearts. As advice, the 8 of Hearts says “give before you get,” which is a nice way of saying for me to just share what I love and something will come back as a result.

The 8 of Hearts being connected to The Moon card is no accident. As a timing device, both the 8 of Hearts and The Moon are connected to the phases of the moon and lunar cycles—which are a month in time. So I read this as saying “give this a month and then make the decision to keep with it or move on.”

So I will update you and share how things turn out.

In the meantime, if you’re on Instagram and want to connect, you’ll find me as @jameshimm.