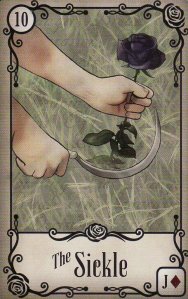 The Sickle offered some useful advice for an exercise I used at a recent talk on Tarot with an audience of Reiki practitioners. (Card is from the Under the Roses Lenormand.)

In my previous post, I wrote about my recent talk on Tarot for a group of Reiki practitioners. In that post, I mentioned I did a Lenormand reading for myself asking about how the talk would go. The final advice card for that reading was The Sickle (also known as The Scythe), which I interpreted as saying it would be good for me to come up with a fast and easy method of reading Tarot that I could have the attendees put into action during the talk.

So, this is what I came up with. I decided I would use my very own approach to the cards when I started. When I started with Tarot 16 years ago, I had no knowledge of the esoteric and occult associations with the cards. I was just starting out by dabbling with the metaphysical sciences of numerology and astrology, and, as I said about The Sickle in my last post, I knew just enough of both to make me dangerous.

Before stepping into the world of the metaphysical, I was a cartoonist, and was working in the independent/small press/underground comic book industry, publishing my own superhero comic book. So, with this in my background, I leaned heavily on the images of the cards and the stories those images told, just like a panel on the page of a comic book.

So, when I told the group we would be doing readings, I also told them they didn’t have to have an in-depth working knowledge of the cards. What we did together that night was designed to stretch their intuitive muscles—and for them to discover the ways their intuition spoke to them. They were, I told them, just dipping their toes into the Tarot waters.

And, rather than having someone bare their soul to an entire room of people, I told them we were going to “create” a person to do the reading for.

I asked the group for the name of the person. Someone said, “John.” I then said we were going to “flesh” John out. I asked, “What details do we know about John?” This is what the group came up with:

After all the details, I asked, “What’s the reason John is coming to us to have a reading done? What does he want to know?”

At this point, I asked for three volunteers from the group. Using the Universal Tarot (Professional Edition), I had each of the volunteers shuffle the deck and pull a card. Another person really wanted to participate, so I had her pull an additional card.

Here were the cards in John’s reading:

The Reiki group’s reading for “John,” using the Universal Tarot: 9 of Swords, The Moon, 5 of Wands, and Temperance.

I turned to the first person, holding the 9 of Swords. I asked her, “Based on what we know about John, and keeping in mind his question, what can you tell him with the card you have in your hand?”

She looked at the card. She said, “There’s a woman on the card, lying in bed. She looks like she’s in pain, like she has a headache. She looks miserable, and that she’s unhappy with her sex life.”

“So, if that’s what you see in the card, what would you say to John about his situation, keeping with his asking about a long-term relationship?” I asked.

The group reflected on this and determined to ask John if there was a woman in his life right now that he was having a relationship with, and if they were having problems. That was good.

Then I added that the 9 of Swords can represent worry, anxiety, and a person tormenting him or herself with negative thinking. Going with that, I suggested we might want to ask John if he is tormenting himself with the nightmare of having caught his wife with another man, and worried about being cheated on again.

I advised the group that we want to empower John here and have him look at himself, and not put all the focus on this possible woman in the picture.

Turning to the next person, I asked her, “Based on what you know about John, the nature of his question, and what we said about the situation card, what would you offer him as advice or guidance?” 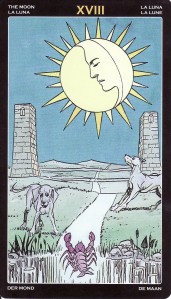 Looking at The Moon, she said, “The first thing I notice is The Moon is a Major Arcana card, and carries more weight in a reading, so this is important.

“Next, I see that one animal is looking up at the moon, and the other is looking at the water.” I asked her to put that observation in the form of advice or guidance for John. She said, “I would offer, for his consideration, that it’s a matter of perspective—it’s about how he chooses to see things.”

“I want you to tell me more about this,” I said. “Let’s put this observation in the context of a relationship, because this is what John is asking us about. There are two animals on the card. Let’s imagine they’re the partners in the relationship. If one partner is looking in one direction, and the other partner is looking somewhere else, what might that suggest?”

“Their focus is not on the same thing.”

“Great! So now how can we put that thought into helpful advice for John?”

“It’s important that he and the person he chooses to be in a relationship with share the same vision and direction for the relationship. That they each want the same things.”

I added that The Moon can represent subconscious fears, and noted how interesting it was that this card followed the 9 of Swords. I told them that, for me, this pair reinforced the fear John has about getting into a long-term relationship because of what happened with his ex-wife.

Even though he was asking this question, he still had more work to do with resolving this issue—which I said was pointed out by the fact that there were two ‘9’ cards here (The Moon is numbered 18; 1 + 8 = 9), and a couple of meanings of the 9 are attainment and completion.

I said Major Arcana card 9 is The Hermit, and he can mean, in a relationship reading, that the person has been alone for a long time—or has the fear of being alone. I also mentioned that this card is the “wisdom gained from experience” card, so we could ask John what he learned from having had that experience.

And finally, as a psychologist, the pair of the 9 of Swords and The Moon suggest to me that John might benefit from counseling or psychotherapy, and the group could make a suggestion and offer a referral if John was open to the idea.

Turning back to the woman who read the 9 of Swords, I added, “For you, because we don’t want to dismiss your observations about the woman being in pain and miserable, The Moon card can represent a woman’s menstrual cycle, so it could be possible she’s in terrible pain due to that.”

Moving to the woman holding the 5 of Wands, I asked, “Based on everything we know about John, the situation, and the advice and guidance offered, what could you tell John about a probable outcome?”

Looking at her card, she said, “It looks like these people are fighting. I’m imagining each of them thinking, ‘I’ve met my match’ about the other people. So, if John were to fight his fear, he would meet his match, meaning he would find someone better suited for him.”

I have to admit, I was like, “Wow. That was really good.”

Turning to the last woman, I said, “You have an extra card. With the card you have, what else could we offer John?” 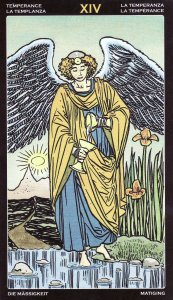 Looking at Temperance, she said, “The first thing I notice is that the figure has one foot in the water, and one foot out. I would say to John that it would be best for him to choose carefully, consider his options, and to find the balance.”

I asked, “Is there anything else that comes to mind about having one foot in the water and one foot out?”

“Yes,” she said. “I remember something you said at the beginning of your talk. You told us that we were going to be dipping our toes into the Tarot waters tonight. It makes me feel that John might be dipping his toes back into the relationship waters, slowly, not wanting to go all in because of his possible fear of being cheated on again.” Very nice.

At this point, I looked at the clock, noticing that we had gone over by 10 minutes! So I concluded the reading there, telling them all they had just done their first Tarot reading. What fun we had!

I share this as a way for you to consider tipping your toes into the Tarot waters. Who knows–it could make you want to take the plunge!