The Lenormand Checks into “General Hospital”

Because I had so much fun with the Lenormand about Will Horton’s marriage on “Days,” I wanted to check into “General Hospital” next.

Recently, I’ve shared my guilty pleasure for soaps, particularly “Days of Our Lives” and “General Hospital.” And you might have checked out some of my posts about my taking up studying and working with the Lenormand Oracle.

A few of my recent posts have combined both soaps and the Lenormand, when I decided I would use the cards to do a reading on the Will Horton-Sonny Kiriakis-Paul Norita triangle taking place on “Days of Our Lives.”

I had so much fun doing those series of readings (which turned out to be as dramatic as the storyline itself), I thought I would turn my attention next to “General Hospital.”

It’s appropriate because, as I write this, “GH” celebrated 52 years being on the air this week (April 1, 1963 was the day the show premiered). In preparation for this momentous occasion, I went with the Lenormand to “check into” General Hospital, and did a reading on the storyline involving the characters of Elizabeth Webber and Jake Doe (who unbeknownst to everyone—including himself—is really Jason Morgan).

As those of you who watch “GH” know, Elizabeth and Jake have started what I call the “romance dance,” and I wanted to see, through the cards, what’s in store for this pair.

Following what I did when I looked at “Days,” I kept with my “storyline style” of reading the cards; here’s the video presentation of that reading, which was done on March 26, 2015:

Since that reading, a few things are already being reflected in the cards: 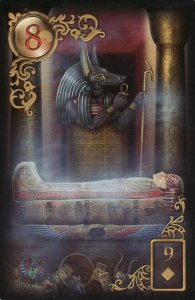 The Coffin, from the Gilded Reverie Lenormand, by Ciro Marchetti.

The reading began with The Coffin. The Coffin, as I said in the video, is a card of endings, limitations, and restrictions. Being the first card, in the first position of the layout (known as a Grand Tableau), one of the things I said was that “this relationship may be over before it begins.”

What happened shortly after the reading, was just as Elizabeth and Jake shared they had feelings for each other, and had a “first date,” a woman, Hayden, appeared on Elizabeth’s doorstep, claiming to be Jake’s wife, putting an end (Coffin) to the relationship—before it began. 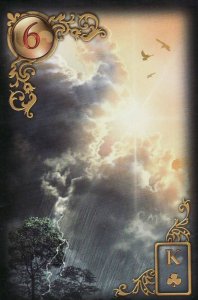 The Clouds, from the Gilded Reverie Lenormand.

The Clouds, which followed The Coffin in the storyline, is a card I said symbolized Jake/Jason’s amnesia. The Clouds is confusion and uncertainty, and now Jake and Elizabeth, as a couple, seem uncertain about the future. Elizabeth is uncertain about Hayden’s story (which we, the viewers, know is not true at all) and has her doubts, and Jake is confused between his feelings for Elizabeth and doing the right thing by his “wife.” This is all about The Clouds, baby! 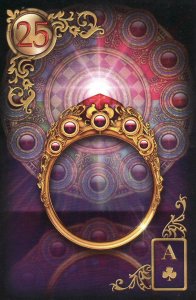 The Ring, also from the Gilded Reverie Lenormand.

The third card in the reading, following The Clouds, was The Ring. The Ring symbolizes relationships, partnerships, and contracts—all of which marriage is. Following The Clouds, this is the confusion and uncertainty (Clouds) about a marriage (Ring),which reflects what’s going on with the whole marriage to Hayden thing.

Not only that, but Jake has been having flashes of memory (and today he had a dream—which goes back to Coffin, which can also represent rest and sleep) of his time with his actual wife, Samantha Morgan—just as she has been stuck (Coffin) on something Jake told her about “there being only one ring.”

Will Hayden be found out? Will Jake remember he’s actually Jason? Will Samantha begin to figure things out? And where does all of this leave Elizabeth?