This week, I wanted to shake things up a bit. I started this weekly reading series when, on a Sunday morning drive to church, I was given the idea (like an intuitive prompt or “download”)—and the particular format of the three-card reading.

So the format has been this: The first card would be the Theme of the week, and come from the Major Arcana, as those cards suggest spiritual influence and psychological factors; the second card would come from one of the Court Cards of the deck, as these cards can suggest an Approach we could adopt to move us through the week; and the final card would come from the remaining Minor Arcana card, and spotlight a Possible Challenge we might face during the week.

Having worked with this approach faithfully for six months now, I felt it might be nice to change things up a little. So, I thought I’d shuffle the cards, and pull three cards from the entire deck—no splitting it up into piles.

Taking this week’s deck, the Original Rider Waite Tarot (‘cause I was feelin’ like goin’ “old school”), in hand, here’s this week’s reading by video:

Our cards for this week are:

Your Week in Tarot: The Hanged Man, Queen of Swords, and 8 of Cups, from the Original Rider Waite Tarot.

Do you notice something? I said I wanted to change things up, but the pattern of the cards are Major Arcana—Court Card—Minor Arcana, which is the very format I’ve been doing all this time! I said, in the video, that it was like the Universe was saying, “Uh-uh!” 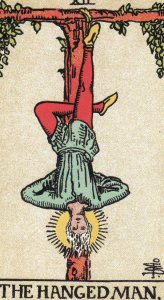 The Hanged Man, representing the Situation for the week, is a card that can indicate a period when it appears things are in limbo. It’s a card of setbacks, delays, and things being put “on hold.”

This week, The Hanged Man is encouraging you to consider how you can see the people and events in your life in a different light (symbolized by the nimbus of light around his head, which is enlightenment). Part of that process is coming to a place of acceptance–being willing to say, “This is the way it is,” which then leads to the art of learning to let go.

Just this morning, I just “happened” to post, on one of my Facebook pages, a quote from author Mark Nepo about sacrifice: “Sacrifice is giving up what no longer works.” I love how the Universe works to repeat a message in different ways, and on different platforms. 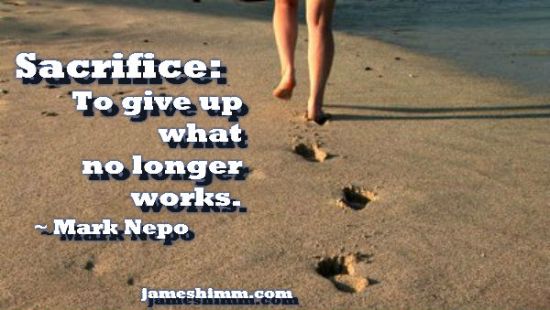 The Mark Nepo quote on sacrifice I just “happened” to post on my Facebook page before conducting this reading. Little did I know the Tarot would follow up with The Hanged Man.

So, with this different perspective on sacrifice, how does that help you consider what is no longer working for you—and would you be willing to give it up? 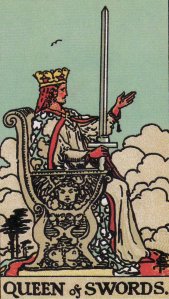 The Queen of Swords, in the position of Guidance/Advice for the week, is a card that represents getting to the truth of the situation, the heart of the matter.

Swords, being the suit that represents our thought life and mental activities, reminds me of the metaphysical adage that “where thought goes, experience follows.” If we no longer enjoy the cycles and patterns presented by our experiences, we must first become aware of the thoughts and beliefs we are holding in our consciousness (The Hanged Man represents becoming conscious—or aware–by changing your perspective) that help to shape those experiences.

So, the Queen here is asking us to discover—and then let go of—voluntarily (again, The Hanged Man)–those thoughts and ideas that no longer serve and support us.

In some depictions, the Queen is sometimes holding a mask in one hand and her sword in the other. Keeping with the idea of “difference” from The Hanged Man, this aspect of the Queen (cutting to the truth) can also be about the Truth of Who We Are. Cutting away the mask symbolizes the removal of “false identities,” those masks and disguises we put on as a façade that keeps people from seeing “the real me” or “who I really am.” We make it about the other person possibly not accepting us “if they really knew,” but it may also be about us not accepting ourselves.

The Hanged Man-Queen of Swords combo, in this regard, is asking us to find a way to accept what makes us different and unique—that makes us who we are. How might you be willing to look at your uniqueness in a way that serves and supports you more powerfully this week?

And the card in the position of a Possible Outcome this week (if we consider and follow the guidance/advice of the previous card), we have the 8 of Cups.

The 8 of Cups can suggest going on a spiritual quest, a search for meaning in one’s life. This can mean literal travel, but most often, spiritual quests are taken by going within (keeping with The Hanged Man’s internal activity/process that leads to growth). Either way, this means that you will be “going it alone,” that it is a trek for you and you alone. You may be moving into unfamiliar territory, into spaces and places you have never gone before.

This journey will require you to leave the past behind–and with that, some people, places, circumstances, and conditions that no longer serve and support you (which seems to be the theme across the cards this week)–in fact, those very things may now be draining you (the 8 of Cups warns of “toxic” people, environments, and circumstances that may be having an effect on your spiritual, mental, emotional, and physical well-being).

This is known as an emotional choice card, sometimes called “a change of heart” card. We sometimes have to get to a point where we think, feel, and say that we’ve had enough and that it’s time to move on—even if we don’t know where we’re going or what lies ahead (our figure walking off into the unknown). Because what is familiar (the stacked cups) is no longer working for us.

When we can do this for ourselves, we are taking the steps (the figure walking) to reclaim our personal power (the number 8 is a number of power). When we stand in the power of who we are, we are standing in, what spiritual teacher Gary Zukav calls, our “authentic power.”

In some circles, this card is also known as “the Amethyst Rose.” When the 8 of Cups crosses your path in this regard, you are going through a time of “spiritual purification.” To aid in this process, you are encouraged to either wear or carry on your person a piece of amethyst. Doing this will cleanse your energy, and allow a spiritual awakening or enhancement to possibly occur (bringing us back to the nimbus of enlightenment around the head of The Hanged Man).

This is a time of release that will help to improve your overall well-being.

Since you’re reading this, what happened in the video was that during the shuffling of the cards, two additional cards came out with the 8 of Cups! I put these cards aside to offer as additional messages for our week.

The cards are the Queen of Cups and the Knight of Swords. 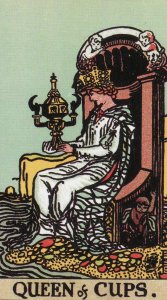 This Queen excels in the metaphysical, and can be a clairvoyant or psychic (also aspects of The Hanged Man), as well as an astrologer or Tarot reader (a-hem!). Her appearance in the reading can suggest putting our intuitive qualities to work this week. When she appears, it’s encouraging us to be willing to allow our spiritual path to flow through all areas of our lives.

With our final card, the Knight of Swords (another Court Card, which is yet another approach to consider this week), there may be challenges and obstacles to face and conquer moving forward—some of which you may know when you see them coming, and others not so much.

Swords, being the suit in Tarot that is associated with beliefs, can suggest that you may need to be prepared to defend some of your beliefs as you move through the week.

Another aspect of this card is that it is associated with the astrological sign of Gemini, and for me, this can mean that there is a potential for communication issues this week. In your communications with people this week, be focused on making your point.

If you are the headstrong and overly aggressive type (the Knight can be this type of person), and while it might be good to express your opinion freely, be mindful of speaking too freely and telling others where and how to get off —if you’re not careful, you could find yourself with a fight on your hands, based on something you said. If you find yourself in an argument, be sure you are solid in your reasoning and your approach is logical.

Based on the imagery of the card, it can suggest that there may be a situation in which you are being encouraged not to rush into. The Knight of Swords can be the type of person who rushes into situations without first thinking them through—and then wants to get out of them just as quickly. With The Hanged Man as the sole Major Arcana card in the reading, and carrying the most weight because of this fact, we are being encouraged to “pump the brakes” rather than leaping first and thinking later.

In closing, I want to point out the pattern of two cards from the suit of Swords (mental activity, the mind), and two from the suit of Cups (emotions, the heart). So, this week, we might consider both what we think—and what we feel—about the experiences we have this week.

And that wraps up our reading for this week. I look forward to sharing this space here with you again next week!