It’s a new week and that means it’s time for a new weekly card reading! Once again, we’re going to the table with the Lenormand; these readings have been met with a great response which has spurred me on to continue doing more of them.

So, taking my copy of the Piatnik Lenormand, I shuffle, cut, and fan out the deck, pulling cards for what’s known as a Line of 5 (it’s also known as the Answer Spread), with this question in mind: “What do we need to know about the week ahead?”

The cards for our reading are Mice, Book, Mountain, Tower, and House.

Mice, Book, Mountain, Tower, and House, from the Piatnik Lenormand. 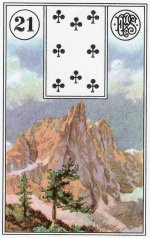 When I read a Line of 5, I start with the middle card, as it is the focus of the reading. Here we have Mountain, which suggests the focus is on challenges, obstacles setbacks, and delays. Mountain can suggest something that will take time to overcome; it can suggest a major hurdle. 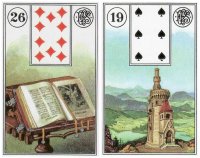 I move to the cards flanking Mountain next, which is the pair Book + Tower.

Book is a card that refers to knowledge, education, study, and teachings. In some decks, the book is closed, which can suggest a secret or mystery; here, in the Piatnik deck, the book is open, which I read as public knowledge (the pun of being an “open book” comes to mind).

So, the pair of Book + Tower can indicate some knowledge of an official capacity. It could represent a company handbook/manual that contains policies and procedures within its pages. Book, being a card of learning and education, and Tower being an institution, the pair could be read as an institution of learning, which would suggest a school or university (As I type this, today is the first day of school for the kids in my area.). The pair could also represent a major bookstore chain, like Barnes & Noble (there are two near me that I frequent regularly). 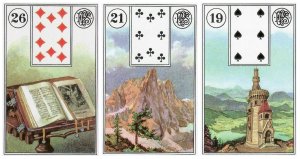 The outer cards may be able to offer further insight. 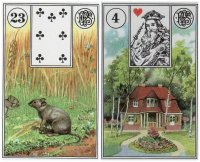 Moving to the cards on each end, as the next pair, we have Mice + House.

Mice is a card of stress and worry, as well as gradual loss. Something has been lessened or diminished (being the first card in the line), and that loss may be something eating away at us, which is another meaning of the card.

House is a card of the home and domestic affairs. So, the pair could be read as stress and worry about getting our “house in order.” Mice being a card of loss, and House being a card of comfort, says the situation could be something that creates discomfort or makes us feel uncomfortable (loss + comfort). 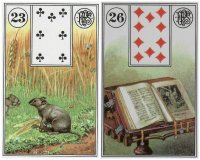 I look to the pair of Mice + Book to the left of Mountain next. This pair could refer to learning about a loss. These cards come before Mountain in the line, which could mean the challenge comes as a result of the knowledge of this loss. In reaction to a challenge, this pair could also suggest a need to be educated or become more knowledgeable, as a way to prevent the loss from either continuing to happen (Mice being something gradual) or happening again (keeping Mice in the past). 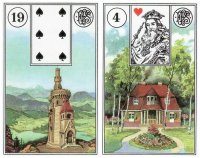 Tower can also be a card of separation, so with House it could represent a separation in the home (House being the immediate family, or family members that live under the same roof).

The entire line, going from left to right, could be read as “The stress (Mice) of learning (Book) about a challenge (Mountain) with an institution (Tower) about housing (House).”

Another possibility could be, “The stress (Mice) of learning (Book) of a challenging (Mountain) separation (Tower) in the home (House).”

And that brings the first part of the reading to a close.

As I did last week, in my next post, I’ll share some other techniques I use in a Line of 5—and these involve the pips, which are the playing card inserts, on the cards.