It’s a new week (Can you believe that it’s going to be September tomorrow—already?), which mean it’s time for another weekly card reading!

Once again, I’m going to the card table with the Piatnik Lenormand in hand for this week’s outlook. Shuffling, cutting, and fanning out the deck, I’m pulling cards for my “go to” spread, the Line of 5 (it’s also known as the Answer Spread), with this thought in mind: “What do we need to know about the week ahead?”

The cards for our reading are Tower, Mountain, Bear, Stars, and Snake.

The weekly outlook: Tower, Mountain, Bear, Stars, and Snake, from the Piatnik Lenormand.

The middle card is the focus of the reading, and we have Bear, which suggests the focus is on being strong, powerful, and resourceful, as Bear is a card of power, strength, and resources.

It’s a card associated with business, and in that context, Bear can represent someone in a position of power and authority, so it could represent a boss, manager, supervisor, or leader. No matter the position or title, Bear is a person of influence—or one who has influence over others.

This was reinforced seeing the first card in the line, Tower. I sometimes read the first card as a “trigger” for the situation being examined with the cards. Tower is a card of companies, corporations, and institutions; it’s a card of big business.

So, with Bear, the focus here could be a manager or boss (Bear) at a large company or corporation (Tower).

Moving to the cards flanking Bear next, we have the pair Mountain + Stars.

As I shared in previous posts, Mountain is a card that refers to a challenge or an obstacle, a setback or delay. Mountain suggests a challenge that, while not insurmountable, could take some time to overcome.

Stars is a card of inspiration and guidance. Stars can represent a wish or goal, something we would like to see fulfilled (wish) or attained (goal). Stars is a card of seeking clarity about the situation at hand.

So, the pair of Mountain + Stars can indicate seeking clarity and guidance about a challenge.

Moving to the outer cards on each end, as the next pair, we have Tower + Snake.

Having already touched on Tower, Snake, for me, is a card of complications, complexities, and a long and winding process. It can also represent a rival and competition, keeping with Bear and Tower as a possible work or business situation.

The emotional aspects of Snake can be jealousy and envy, as well as lies and betrayal.

Potentially putting a “face” to the situation, Snake has the playing card inset of Queen of Clubs, which could put a woman in the mix. If that is the case, this woman could be clever and intelligent (in the positive sense); tradition says she might have dark hair and wear glasses. On the flip side, Snake can be a person who is a deceiver, known for dishonesty (going with the forked tongue of a snake).

With Bear as a manager or boss, Snake could suggest this person may have issues with how he or she speaks to people, as some snakes “bite” and can be “venomous.”

As some see Snake as a symbol of healing and transformation, Bear and Snake could suggest the manager “change” his or her communication style—one from inflicting harm with his or her words, to one that is more “charming” and persuasive.

So, the pair of Tower + Snake could be read as complications within a company or corporation. Tower, also a card of policy, rules, and regulations (making things official), could make the pair read as a complicated policy, rule, or regulation being instituted; with Snake as the last card in the line, it would suggest a long and winding process, probably with a deal of entanglements (which would also keep with the setbacks, delays, and challenges of Mountain).

Looking to the pair of Tower + Mountain, to the left of Bear, I read as a challenge within a company or corporation.

Interestingly enough, both cards can mean isolation; Tower is a card of self-imposed isolation, those times when we need to separate ourselves from others for a time, while Mountain is a card of isolation that can be imposed upon us, and could take longer to work through than Tower. 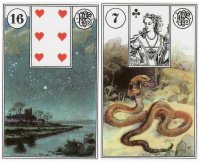 Moving to the pair on the opposite side of Bear, we have Stars + Snake. The pair could be read as a problematic goal, a complex goal, or guidance that leads to a complication.

With the aspect that Snake could be a clever and intelligent woman, combined with Stars could see her as a coach; coaching being a useful resource (Bear) in companies and corporations (Tower), this pair could suggest coaching being provided for the manager (Bear), in the hopes (Stars) of a positive transformation (Snake).

The entire line could be read as: The company (Tower) challenges (Mountain) a manager (Bear) with a complicated goal (Stars + Snake).

And with that, I’ll wrap up the first part of this week’s reading.

Later this week, I’ll share the other techniques I use in a Line of 5—which involve the pips (the playing card inserts) on the cards, and bring another layer to the reading.