It’s a new week, and that means it’s time for a new card reading!

This week, I’m trying something new, just to keep things fresh; the reading for the week is going to be a tag-team with the Lenormand and the Tarot.

I recently got a new deck to add to my rapidly growing collection of Lenormand decks. It’s the New York Lenormand by Robert M. Place, a Tarot scholar and deck creater, who is acclaimed and well-regarded in the Tarot community.

The New York Lenormand brings Tarot into the deck by replacing the playing card inserts with Minor Arcana cards.

When I first heard of this feature of the deck (by way of another publisher of a Lenormand deck when I was purchasing his deck—which I will be showcasing in the future, once it arrives), I knew I had to have it, as it blends both my worlds of Tarot and Lenormand into one deck.

In addition to that, I’ve been seeing people suddenly responding to previous Tarot readings (both on the blog and the videos), so I thought it might be time to resume doing more of them in some way.

As we begin this week, those of us walking a metaphysical path in any shape, form, or fashion, know that we are in the midst of two powerful phases: a solar eclipse, and a new moon.

A reader of my blog and viewer of my videos on YouTube had made the suggestion of doing a reading around these phases, so for this week, I’m taking the New York Lenormand in hand, and asking this question: “What do we need to know about the energies of the solar eclipse and the new moon (in Virgo), as far as their effects for the week ahead?”

The cards for our reading are Rider, Fish, and Bear.

Your cards for the week: Rider, Fish, and Bear, from the New York Lenormand, published by Robert M. Place. 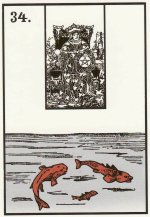 The middle card is the focus of the reading, and we have Fish, which suggests the focus can be about money and finances. Fish, for me, can represent deep and depths, so going deeper, the focus of these energetic phases could center on our sense of wealth and abundance.

Moving to the left of Fish, we can form our first pair, Rider + Fish.

Rider is a card of arrival, so I see this as the arrival of both the solar eclipse and the new moon, and the energies they bring “visiting” with us (Rider can indicate a visitor). 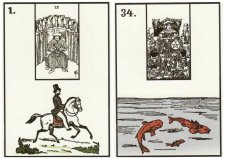 Another possibility, keeping with the “deeper” (spiritual) aspect of Fish, we might receive messages of being “in the flow” of life (the water on the card).

Also, we might be encouraged to become more aware of how we are working (Fish is a card of business, which is the world of work) with the Universal Law of Circulation (Fish being a card of circulation).

The Law of Circulation states that all things in the Universe are always flowing in circulation but at an ever expanding rate. What you give to one person, you will receive from a different source. So you don’t have to give with the expectation of receiving back from the same person you give to, but knowing that it will definitely come back to you multiplied from other sources.

So, what are you circulating? What is your capacity to receive and are you ready?

This week, the pair of Rider + Fish is saying, “Go with the flow”—and see where it takes you.

And finally, this pair reminds me that Mercury goes retrograde later in the week (September 17), although it’s said that we experience its effects prior to and after its calculated time period. So, Rider + Fish is a reminder to pay attention to the messages (Rider) being circulated (Fish) to either minimize or eliminate the possibility of any misunderstandings.

Another pair in this reading is Fish + Bear.

Bear is a card of strength and power. Going with that, this pair could be referencing the power of wealth. Another idea would be a wealth of power. In one context, it would be that money (wealth) can make one powerful, which is extrinsic. In the other, power is more intrinsic, that it comes from within.

Going with Fish being flow, the pair would than read as powerful flow. Here, we are being encouraged that being “in the flow” of the energies of the eclipse and the new moon will make us stronger in the end, if we allow it.

And the final pair in this triplet of cards, Rider + Bear, can be read as powerful news and messages. This could suggest receiving strong messages about our strength of character and our personal power, as these energies flow throughout our week.

To round out this reading, from the perspective of the Lenormand, I’ll take the numbers from the Tarot card inserts as if they were playing cards (which are the pips of the deck), and take their sum as the means of deriving the card that will serve as the final advice from the Lenormand.

The 32nd card in the deck is Moon.

Moon is a card that speaks about our work and career, as well as our vocation. So, we may be called to take a look at our work in the world, as well as what we believe we are called to do in this world (purpose).

Moon is also a card of recognition and reputation, so we might be encouraged to consider what it is that we are either known for—or what we would like to be known for.

Keeping with the news and messages aspect of Rider, Moon could suggest those may be of an intuitive nature, that our inner GPS may want to lead us this week.

Looking at the insert of Moon, we have 8 of Cups (known as 8 of Hearts in cartomancy). For me, this is the “change of heart” card.

When we receive this card, we are being told that we are embarking on a spiritual journey, searching for the meaning of life—and this is a solitary trek.

This is a card that asks us to consider putting certain people, places, and situations behind us because they have now become toxic and are draining us. This keeps with the new moon, as the new moon is a time to release what is no longer serving and supporting you.

The 8 of Hearts says this is a time (the eclipse and new moon) of spiritual purification. Keeping with the idea of detox, if you work with crystals as part of your spiritual path and practice, you are being encouraged to wear a piece of amethyst (in the form of jewelry), or carry it on your person, as the 8 of Hearts (Cups) is known as the “Amethyst Rose” card.

Moon and 8 of Hearts (Cups) share something in common: both can indicate phases of the moon, again keeping with the new moon cycle we’re currently in. In light of this, both cards can represent a month in time, as a full lunar cycle lasts a month.

So, even though the time period in the question is a week, this aspect of the cards is asking us to notice what we experience over the course of the next month.

That brings the reading, from the perspective of the Lenormand, to a close. Since this is a tag-team, the Lenormand has tagged the Tarot for its turn, which I will present in the very next post.