In this post, we’re picking things up where we left off from the previous post for this week’s Lenormand & Tarot tag-team reading.

In the previous post, we started the reading off with the Lenormand, asking about the energies of the recent lunar eclipse and full moon (which has been referred to as the “super moon” and “blood moon”), in terms of the possible effects of those energies for us this week.

Now, we’re switching gears, turning to the Tarot, seeing what’s up with all of this in the cards.

If you read that last post, then you’ll recall our cards for the week (from the Mystical Lenormand by Regula Elizabeth Fiechter & Urban Trösch) are Child, Ring, and Whip. 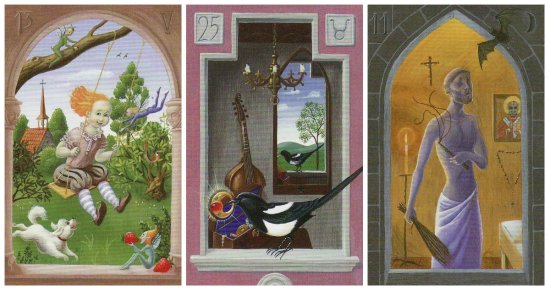 You’ll notice that this deck doesn’t have the playing card inserts that I enjoy working with. The playing cards associated with these cards are: Jack of Spades (Child), Ace of Clubs (Ring), and Jack of Clubs (Whip).

One of the things that stands out with the line of playing cards is that both Jacks are facing the Ace of Clubs between them. I usually read face cards looking at each other as being in agreement with each other (and that would fall in line with Ring as the focus card being a possible agreement).

On the other hand, we could consider the possibility of a “face off,” with the Ace of Clubs being something that is coming between the two parties (based on its position in the layout). Seeing things that way would make the situation more like Whip, which is a card of conflict, strife, and fighting.

The Tarot cards that I see as correspondences to these playing cards are: Knight of Swords (Jack of Spades), Ace of Wands (Ace of Clubs), and Knight of Wands (Jack of Clubs). 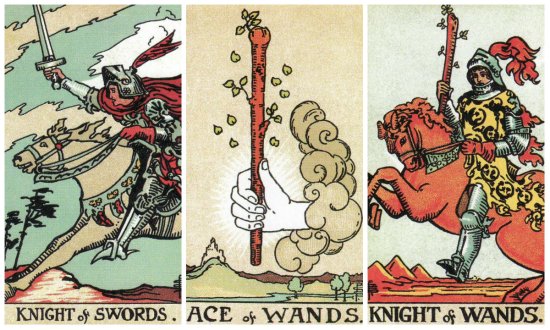 Knight of Swords, Ace of Wands, and Knight of Wands, from the Original Rider Waite Tarot.

With Ring being a card of patterns, I look to the patterns I see in this trio of cards.

First, I see two of the three cards are from the suit of Wands. This is the suit of work and business, of intention and action, and of image and identity. So, for some of us, we may be dealing with actual work and business related issues. If not the literal, then some of us will have things we need to work on or some business we need to take care of.

Being a time of beginnings (Child from the Lenormand), this would be the time to consider setting new intentions, and taking the necessary actions that align with those intentions.

If we consider Wands as being about image and identity, some of us may be examining the images we are projecting in our relationships with others, as well as looking at the people we choose to identify with. Does our image need some updating? Are we hooking into the right people for the right reasons?

The other pattern that emerges is that there are Knights on each side of the line. Knights, for me, represent focus, direction, action, and movement. For some of us, we might need to consider the direction our lives are moving in. Do we like where we’re headed—or is it time to change lanes? 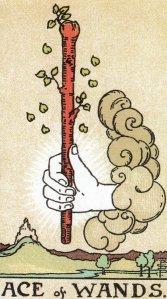 And, to keep things moving here, let’s go to the center card, the Ace of Wands, just as we did with the Lenormand part of the reading.

When this card sprouts into your life, a new cycle, phase, or situation is beginning. Aces suggest the promise and potential for the future, so consider this the starting point for new thought-seeds to be planted now that will develop and manifest at a later time. This is a time of power!

This week, look for anything that comes your way as a source of inspiration, motivation, passion, and sparks your interest.

This source could be the thing that gets you started on a new business or creative endeavor, as the Ace of Wands helps to reveal the creative path or the career path you are on. You may be considering a new job or up for a promotion on your existing job.

There’s talk about not starting anything new during a Mercury retrograde (which we are also experiencing!); if that is the case, the Ace of Wands can suggest a spark or passion being re-ignited, so some of us might find ourselves returning to a former project we started that we may have sidelined and allowed to collect dust. Time to blow the dust off!

When the Ace of Wands appears, look at it as a power boost of supercharged energy. As with all the Aces, it is a gift to do with as you like. If you accept it, be clear of your intent, as the suit of Wands can represent our intentions and the actions that result from those intentions. 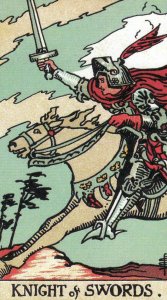 With the Knight of Swords, to the left of the Ace of Wands, there may be challenges and obstacles to face and conquer moving forward—some of which you may know when you see them coming, and others not so much.

Swords, being the suit in Tarot that is associated with beliefs, can suggest that you may need to be prepared to defend some of your beliefs as you move through the week.

Another aspect of this card is that it is associated with the astrological sign of Gemini, and for me, this can mean that there is a potential for communication issues (keep in mind, Mercury is the ruling planet of Gemini—and is in retrograde!) this week. In your communications with people this week, be focused on making your point.

If you’re the headstrong and overly aggressive type (the Knight can be this type of person), and while it might be good to express your opinion freely, be mindful of speaking too freely and telling others where and how to get off —if you’re not careful, you could find yourself with a fight on your hands, based on something you said. If you find yourself in an argument, be sure you are solid in your reasoning and your approach is logical.

Based on the imagery of the card, it can suggest that there may be a situation in which you are being encouraged not to rush into. The Knight of Swords can be the type of person who rushes into situations without first thinking them through—and then wants to get out of them just as quickly (this Knight can indicate sudden and hasty exits—and look at how he’s making a beeline away from the Ace of Wands).

Here’s an analogy I see with this Knight: consider him the car mechanic of the Tarot. He’s the guy who wants to get under the hood of a car and make sure everything’s in working order—he likes to investigate things. And that’s good—especially in those moments when he wants to get in the car and just go—and go immediately.

What might you need to check out further so when it’s time to jump in, you know full well what you’re getting into? 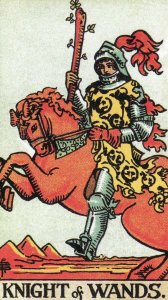 When this Knight crosses your path, you’re being encouraged to consider how you’re approaching things, and about the things you’re focusing on. This card typically means change is in the air–so fasten your seatbelt!

Those possible changes may come as a result of feeling a sense of restlessness and wanderlust. There may be some thoughts of travel or relocation, either for professional or personal reasons. I see this card come up when people change residences, get a job transfer, or decide to return to university. The change most often involves some form of travel.

I’m not one for pinpointing geographical locations with Tarot (I would freeze up when given a blank map of the United States in school, with the instruction of filling in the states—my sense of direction is really challenged), but I do see this Knight as the possibility of traveling west (there’s a Pet Shop Boys cover of “Go West” that I sometimes hear in my head when this card shows up), as he is facing west for me.

And come to think of it, so is the other Knight. Hmmmm…

And keeping with the whole change thing with this Knight, and Wands being about image and identity, I sometimes see him as the embodiment of these words, spoken by Gandhi: “Be the change you wish to see in the world.”

This card can be about admiration. In relationships (Ring), it’s important to remember that as we seek out people we admire, we must also be people that others can admire.

Turning a corner to round out this reading, we can take the numbers on the cards to arrive at the essence, which will be the Major Arcana card bearing the same number. This week, we have 12 (Knights for me are valued at 12) + 1 + 12, which once again adds to 25. Since there are 22 cards in the Major Arcana, we take 2 + 5, which gives us a total of 7. 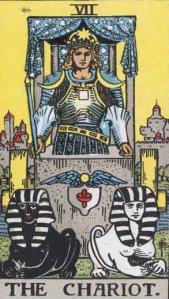 The 7th card in the Major Arcana is The Chariot.

When the Chariot pulls up into our lives, we are being encouraged to consider our life direction (Notice a pattern? The Knights are also about direction…).

The Chariot urges us to realize that life is about both the journey and the destination.

As we see in the image, our Charioteer rides alone, the emphasis of the 7 being on solitude. Sometimes, in life, we have to go through experiences alone–no one can accompany us (which, most often, is a spiritual journey).

This also says that we are responsible for both where we are in our lives in the present moment, as well as where we want to be in the future. You can’t be the passenger in your own life experience.

When we blame other people for where we are in life, we have given them the reins, allowing them to control where we go and wind up. If that is true for you, this is the week for you to consider why that might be (the 7 being about self-awareness and personal insight) and how you can create positive ways to get back in the driver’s seat.

Lastly, this card is all about forward movement, advancement, progression, and being on the right track. But look at our image once again: our Charioteer has no reins to move the Sphinxes; the movement here is a mental process, which reflects the metaphysical characteristics of the 7, which is that everything in life first begins with the thought.

It reinforces the idea that our thoughts create our experience.

I’ll bring this joyride to a stop here: Consider where you want to go, and how you will get there.

Just like our daily travels, we don’t just hop in the car and go (well, most of us don’t, anyway); we have some idea where we want to go, and the route we will take to get there.

And part of that process, just like we learned when we were taught how to drive, is to take a moment and consider where you are at in the present moment. You know, that time when we check our surroundings and the interior workings of the car, as we strap in and start the ignition. Look around you, and appreciate that previous journeys have brought you where you’re at now.

Ask what you learned, being grateful for the learning opportunity, as you wave bye-bye in the rear view mirror, on to the next exciting leg in the road trip of your life.

Wishing safe travels (of all kinds) this week…