It’s a new week, and that means it’s time for another tag-team reading! 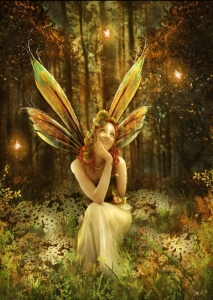 Remembering that Doreen Virtue once said “fairies are very close to nature” played a part in this week’s deck selection.

I don’t know if it’s been covered on the national news the way it has been on the local news, but here in South Carolina, where I live, we’ve been experiencing a lot of rain over the past weekend; that constant rainfall has caused severe flooding in a number of areas throughout the state.

Reflecting on this event, I had Mother Nature in mind when I was considering decks for this week’s reading. I remembered something I once heard Doreen Virtue say about fairies, that they were elementals that were close to nature, and close to the earth.

Scanning my decks, I stopped at the Fairy Lenormand by Marcus Katz, Tali Goodwin, and Davide Corsi. Taking the deck in hand, I’m asking this question: “What do we need to know about the potentialities and possibilities for the week ahead?”

The cards for our reading are Birds, Rider, and Key.

Birds, Rider, and Key, from the Fairy Lenormand by Marcus Katz, Tali Goodwin, and Davide Corsi. 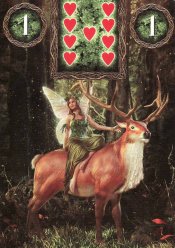 The middle card, being the focus of the reading, is Rider, which suggests the central issue can be about news and messages being delivered. Rider, for me, can also represent an arrival or a visitor.

Moving to the left of Rider, we can form our first pair, Birds + Rider. 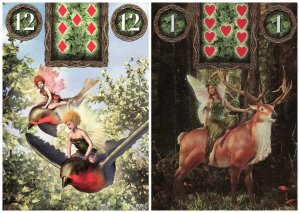 When I look at this pair, I immediately see voice (Birds) + mail (Rider; mail is news and messages that are delivered) = voicemail.

In this vein, Birds can indicate phone calls, so one of the possibilities this week is that we receive a message by way of a phone call—either we catch the caller as the call comes in, or that we’ll be left with a voicemail we will listen to at a later point in time.

From an emotional standpoint, Birds can represent frustration, anxiety, and upset, so the pair could suggest frustration (Birds) with a piece of news or a message (Rider).

Here’s one that’s a fit for me this week (so far). Birds can represent siblings; I spoke with my brother last week about getting together this week, as he said then that there were things he wanted to talk with me about in-person. He said that he could come by my house one day this week, as he noted that I often drive out to his house to see him.

So, Birds being siblings, and Rider being a visit, the pair reads as a conversation (Birds) between siblings (Birds) about a visit (Rider) to share some news (Rider). As a way to validate this, my brother called (Birds again) after the video was made to once again suggest getting together this week to talk; we agreed to wait until after the rainstorm has moved out to do so (according to weather forecasters, that would be about midweek). 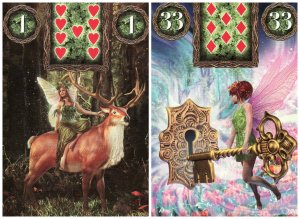 Another pair in this reading is Rider + Key.

Key is a card of answers and solutions. Key can mean a discovery, a breakthrough, and a revelation. It can mean something vital, certain, and important. For me, it’s a card that says, “Yes!”

Looking at the image, the fairy holds the key, positioning it at the keyhole. On one hand, she could be about to put the key into the keyhole and unlock something, in order to gain access; on the other hand, perhaps she’s removing the key and locking something away. Key can be the means in which we either unlock or lock things.

It can also be a visual pun for that saying “we hold the key.” 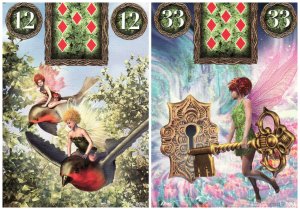 And the final pair in this triplet of cards, Birds + Key, can be read as: an important conversation; communication is key; a revealing conversation; and a conversation that leads to a breakthrough.

And going with Birds being a phone call, the pair could suggest answering the phone call.

Using a shortened variation of the Hidden Dynamics technique for possibly more information (since there are three cards rather than the five I typically use this technique with), Birds has the 7 of Diamonds as its inset. 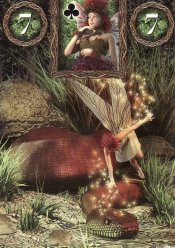 The 7th card in the deck is Snake.

Snake is a card that, for me, can suggest complexities and complications. So, the news and messages (Rider) may be of a complex or complicated nature.

In terms of verbal communication (Birds), Snake can suggest a long and winding process, so I can read this as someone who goes off on tangents in a conversation—meaning the person goes on, and on, and on, and on (you get the idea).

Birds and Snake could be a suggestion to consider the source of the information; Birds can indicate gossip, rumor, and speculation, while Snake can mean someone is not telling the truth and is not trustworthy. 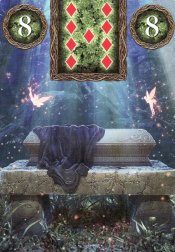 On the other side, we have the 8 of Diamonds in Key; the 8th card of the deck is Coffin.

Coffin is a card of endings and completion. It could suggest that the news may be to finalize something, to bring closure to a situation, to put an issue to rest or bed once and for all.

The pair of Snake + Coffin can be read as ending the complication, or that a complication comes to an end. 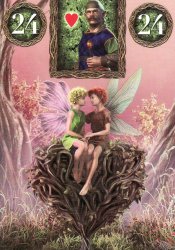 The 24th card in the deck is Heart.

Heart is a card that speaks of passion, love, and enthusiasm. It represents the emotions of the heart. This week, consider the conversations you have with people, and see what you talk about with passion, the things that you love. For some of us, it may be people; for others, it might be a cause, a job or career, or a hobby or interest.

In the video above, I was verbally communicating (Birds) and delivering the messages (Rider) I was discovering (Key) through the cards, which is something I love and am passionate about (Heart), just to provide a practical example. 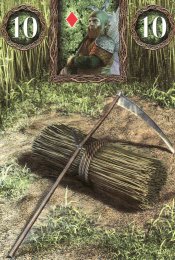 Regarding communication (Birds), Scythe might be advising us to get right to the point in our conversations, but also warning us of being too blunt, as we might hurt someone with our words (Mercury is still retrograde this week, you know). With that, I see this card as asking us to be mindful of cutting someone off while he or she is speaking.

And also too, the cards might be giving us a heads up about the possibility of being disconnected (Scythe is a card of disconnection) while on a phone call (Birds). If it happens, keep your cool and don’t get upset or frustrated (Birds).

That brings the reading, from the perspective of the Lenormand, to a close (Coffin). Since this is a tag-team, the Lenormand has tagged the Tarot for its turn, which I will present in the very next post.