In the first part of this week’s reading, the deck used for the Lenormand portion of the tag-team was the Mystical Lenormand, in honor of the full moon in Taurus passing through the week.

In this second part of the reading, I’m honoring the other event taking place this week—Halloween—by using the Halloween Tarot, created by Karin Lee & Kipling West.

So, picking up where we left off, you’ll recall that the Lenormand cards that set the tone for the reading this week are Cross, Owls, and Fish.

First, I see two of the three cards are from the suit of Pumpkins (Pentacles). This is the suit of the material side of life, associated with things like finances (like Fish, from the Lenormand part of the reading), career, and well-being.

Pumpkins are about the things we assign with value, and are worth something to us. Given that, I also see this suit as speaking about our personal self-worth and value, which is more priceless than any material thing we can possess.

The suit of Pumpkins, in that respect, is also about our core value system.

With the focus card being the 7 of Pumpkins, the central message, this week, is to take the time to evaluate your life. The 7, for me, is a number of self-awareness and personal insight. It can also suggest that exploring one’s spiritual nature will aid in his or her personal growth and development.

This is a card that suggests reaping a harvest, and that the hard work you’ve put into a situation is now starting to produce results. This is the Universal Law of Sowing and Reaping, which basically says that you only get out of any situation what you put into it.

So, when the 7 of Pumpkins appears, consider taking a step back and ask yourself, “Am I getting what I want out of this (situation)?” If the answer is no, then ask yourself what energy have you been putting into it—because it’s that energy that has helped to produce the result you have.

Keeping with the imagery of our scarecrow friend working in the field, and just as a sower who plants a seed, and gets what was planted (planned) for, it is the same for you. The seed is your intention.

But you also have to take action (this card can also be a warning of procrastination). The land that the seed goes into has to not only be fertile, but it must be tilled, and the seed has to be nurtured (fed and watered) in order for the harvest (growth, result) to take place. With that, ask yourself, “What’s my intention here? What actions do I need to take that are in alignment with that intention?”

Also, keep this thought in mind: When we explore this idea of sowing and reaping, we can sometimes go into looking for the harvest immediately after the seed has been planted. There is a space of time in between that also has to be allowed for, evidenced by the scarecrow waiting (by leaning on his garden hoe) to see what develops (growth).

True and lasting growth is never an overnight process.

Take a look around at the “fruits of your labors” in your life this week and ask yourself, “Was it worth it? Was the return worth the investment of the time, energy, and resources I put into this?” If the answer is yes, then affirm what you have with gratitude. If the answer is no, then let this be the week you prepare the ground to receive the new seeds (intentions) you’ll be planting. 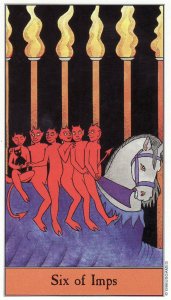 Moving to the left of the 7 of Pumpkins, we have the 6 of Imps (Wands).

When the 6 of Imps gallops into your week, expect a breakthrough! This card is about triumph, victory, and success. You may receive all sorts of praise throughout the week. Accept them when they come! The 6 of Wands is all about achievement, recognition, rewards, support, and being applauded for your efforts!

One of those things you’re evaluating might be the work you do, as Imps is the suit associated with work and business. If that is true for you, the 6 of Imps can be about finding the work that is rewarding to you. You may have a strong need for recognition in the job or career you work in.

This card can also suggest that public speaking plays a part in the work you do, or that you should consider it as a means to gain more exposure and visibility (remember Owls also suggested a public speaker). The 6 of Imps is a card of taking the actions that will advance your career.

Along those lines, consider:

This week, revel in the accomplishments you have made so far as you continue to strive ahead.

On the other side of the 7 of Pumpkins, we have the King of Pumpkins (Pentacles).

The King of Pumpkins is asking you to consider the value you place on things this week. Pumpkins, as I mentioned earlier, is the suit which pertains to the value system of money, but also to our inner value system.

We place a certain value on all the things in our lives–whether it be people, things, or events and circumstances. This King, for me, is assigned the astrological sign of Taurus, which is the sign of ownership and possessions, which, if you recall, is also the sign the full moon will be in this week (gotta love the synchronicity!). Everything we possess has a value and worth to us, or else we would not have them in our lives. If it was something we purchased, we agreed on the value (cost) of the item when we bought it. If it was something given to us, it holds a sentimental worth and value.

The King of Pumpkins also encourages us to consider our personal sense of value and worth this week. Are we getting our sense of worth and value externally (based on the people and things we have in our lives), or are we bringing out the richness within ourselves to everything we come in contact with (The King of Pumpkins is known as having the “Midas Touch”)?

And keeping with the 7 of Pumpkins being the evaluation process, the King of Pumpkins is asking us to give up what is no longer appropriate for what is—which is making a value assessment.

Now, because I only get to use this deck at this time of the year, I had the burst of inspiration to use the Hidden Dynamics technique I typically reserve for my work with the Lenormand here. I will use the flanking cards to pull their corresponding Major Arcana cards for further insight into the evaluation process presented by the 7 of Pumpkins.

Keeping with the holiday, consider it a treat!

The 6 of the 6 of Imps corresponds to The Lovers.

This card is also called “The Choice.” This card can suggest you are at a crossroads in your life, and now you are faced with having to make some major life choices. With the 7 of Pumpkins being a card of evaluation, looking at the choices made, as well as the possibility of making new—and different—choices would naturally become a part of the process.

When I look at the image of the card, the woman and the vampire provide two extremes. The woman is full of life, while the vampire represents the people and situations that can suck the life out of you. This week, consider what in your life makes you feel alive—as well as the things that are energy drains.

And for each of those energy drains, go back to the 7 of Pumpkins and see what you get (the return, the harvest) out of keeping yourself in a situation that is sucking the life out of you. 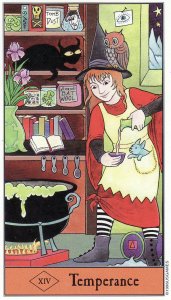 The King for me, is valued at 14, and the 14th Major Arcana card is Temperance.

In the image on the card, we have a witch concocting a brew of some kind. Going with that, Temperance can be a card of experimentation and trial and error.

Along with making new and different choices (The Lovers), things will have to be tried out to see if they work for you or not.

Temperance, being a card of patience, says you will have to be patient with both yourself and the process. Things may not work out the first time you try them out. But don’t consider those attempts as failures; each “experiment” that doesn’t work out is bringing one step closer to the right blend of ingredients and elements that will work—that will produce the result you’re seeking.

Temperance is a card of seeking creative solutions.

To round out this reading, I’ll add together the numbers from the Tarot cards, and take their sum as the means of deriving the card that will serve as the major lesson of the reading. 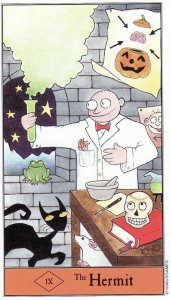 The 9th card in the Major Arcana is The Hermit.

Here, we have a scientist working in his lab, much like the witch in Temperance. So, there’s a repeating message about experimentation here.

The Hermit is a card that speaks of the solitary search for meaning and truth. And, if you stop and consider for a moment, the scientist does that: he or she experiments to either prove or disprove a theory, as a way of explaining the mysteries of life. How can you be like a scientist probing the mysteries of your own life this week?

One piece of advice that might help in that process for you lies in the part of the image that has the pumpkin on the chart, with its lid raised, exposing its brain. I see that as symbolically suggesting this “search for meaning” is meant to uncover what you think and believe—as well as open your mind to more enlightening ideas.

The Hermit is about being self-aware, and gaining wisdom from each life experience you have. When this card comes up in a reading, you’re being encouraged to take a step back and ask yourself, “What is the possible lesson in this situation for me? What is this experience teaching me–about me?”

Consider your life to be your own personal laboratory—with each experience being an experiment to either prove—or disprove—your theory of who you really are.

And with that, Tarot finishes its turn, wrapping up another weekly reading!

Hoping you have a Tarot-tastic week…and a Happy Halloween!