Can you believe it’s November already? Where has the time gone this year?

In addition to being a new month, it’s also a new week, which means it’s time for another weekly card reading!

This week, I’m going retro and returning to the weekly Lenormand outlook reading I was doing before it evolved into the tag-team it is now.

The deck being used this week is the Wanderwust Lenormand, created by Wandering Oracle (which you can learn more about at his site). This deck has quickly become the favorite Lenormand in my collection to date, as the connection was made instantly with the first reading I did with it right out of the box (the story might serve as a future post itself).

Shuffling, cutting, and fanning out the deck, I’m pulling cards for my “go to” spread, the Line of 5, with this thought in mind: “What are some of the potentialities and possibilities for the week ahead?”

The cards for our reading are Whip, Sun, Stars, Anchor, and Lady.

Whip, Sun, Stars, Anchor, and Lady, from the Wanderwust Lenormand. 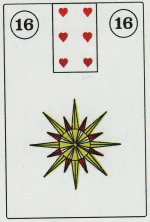 The middle card is the focus of the reading, and we have Stars, which suggests the focus can be about guidance and direction; I see the symbol on the card as looking like a compass with directional points, which is how I make this association. These days, we might see the GPS as a more modern-day equivalent.

It’s also a card associated with inspiration. Stars, in this regard, is asking us to focus on what inspires us this week; as a life coach (another association of this card for me), I see Stars as aspirations that help us attain goals.

And lastly, Stars, for me, can indicate the metaphysical. So, things of a metaphysical nature (like divination, in my particular case, with my work as a card reader) may also be central this week.

To be clear on the possible context of this week’s outlook (Stars can also mean clarity), the surrounding cards will offer us more information. 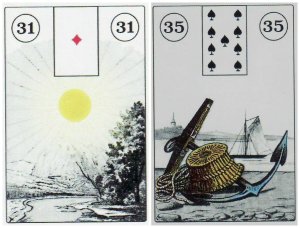 Moving to the cards flanking Stars next, we have the pair Sun + Anchor.

Sun is the best card in the deck and can outshine all the cards it comes in contact with. Sun is a card of confidence and success, a card of illumination and enlightenment.

Anchor is a card of stability and security, as anchors serve to keep something in place.

It’s also a card of work and that work being one’s livelihood. With that, the work might be routine, and some might see it as being somewhat dull, boring, and maybe predictable.

Anchor is a card of hope and perseverance; depending on the context, Anchor is an encouragement to stick with something, that we are being called to be persistent.

The pair of Sun + Anchor could be read as confidence or success with work; or a daily (Sun can represent daytime) routine. Being that Sun is about success, I’m seeing this pairing as saying that in order to be successful (Sun), we must make success (Sun) a part of our everyday routine (Sun + Anchor).

As a life coach (Stars), the “gurus” (Stars, as gurus are considered well-known and somewhat famous individuals) in my industry would say that we need to make success a habit. And that sometimes requires us to make some changes in our everyday routine, that will allow us to achieve those goals (Stars) rather than keeping them as things we hope and wish for one day (Stars being a card of hopes and wishes).

Moving to the outer cards on each end, as the next pair, we have Whip + Lady.

Whip is a card of repetition and repeated activity. I see it as a card that can suggest trying to work or sort things out; it can suggest something needs to be “cleaned up” in some way.

Going with the idea that something needs to be worked out, Whip can be a card of conflict and strife. The conflict can run the gamut, from heated words being exchanged to a debate and then becoming an argument; it can also suggest the verbal fighting escalates into something physical.

In a physical fight, the parties involved work to beat the other person up. Sometimes, Whip can indicate the ways we can beat ourselves up. If Stars is about guidance, direction, and goals, then we might be beating ourselves up (Whip) for being in places and spaces we don’t like being in at this stage of our lives.

If that is the case, then Whip is asking us to possibly become more disciplined in achieving those goals, as I see Whip as a discipline card (in both the positive and not-so-positive sense of the word).

The pair of Whip + Lady can be saying something about the woman. The cards could describe the woman as being argumentative, or that there may be an argument with a woman possibly coming up in the future.

Since Lady is facing Whip, the pair could also be read as: a woman facing a conflict or strife; a woman seeks discipline; a woman is beating herself up; a woman is going to be trying to work or sort things out.

With the idea of seeking some form of discipline, it could suggest the woman seeks some form of training (Whip) that will help her become disciplined. With Whip being a card of repetition, physical activity, and “work out,” there might be a need for a physical trainer to “whip” someone into shape. 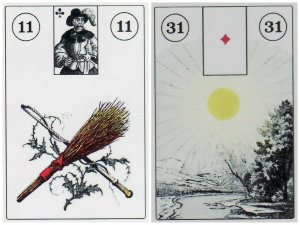 Looking at the pair of Whip + Sun, to the left of Stars, the combination could be read as a discipline that becomes successful or a discipline that leads to confidence. The pair can suggest a daily workout or daily training, one that would take place while the sun is up.

With regard to a possible conflict, the pair could indicate shining a light on the conflict and then working things out successfully in the end. The pair could suggest that the parties involved learn to resolve conflict consciously (Sun being a card of conscious awareness). Wouldn’t that be a wonderful thing?!

Moving to the pair on the opposite side of Stars, we have Anchor + Lady, which might be read as: the livelihood or work of a woman; the routine of a woman; or a woman who is both hard-working and serious (Anchor describing the woman).

The pairing could suggest the woman (Lady) is focusing on the future of her work (Anchor; and that Lady is facing Anchor), with the goal (Stars) of creating more stability and security (Anchor) in her future (again, Lady facing Anchor).

How might she do this? The pair of Sun + Stars could shed some light on this, as the pair can suggest success online (Stars as a card of the internet); the woman being inspired to succeed and also becomes more confident as a result; or that she seek daily inspiration and daily guidance.

The pair of Stars + Anchor would offer that the inspiration or guidance becomes routine or that it is directly connected to work and livelihood. The pairing also suggests the inspiration to “stick with it,” which will lead to persevering.

One possibility for the line, reading the cards from left-to-right, might be: Trying to work things out (Whip) in a conflict (Whip) successfully (Sun) becomes the goal (Stars) of a serious, hard-working (Anchor) woman (Lady) for the future of her work and livelihood (Lady facing Anchor).

And that’s the beauty of reading with the Lenormand–so many possibilities!

Later this week, I’ll share what the pips (the playing card inserts) have to say about all of this, to bring another layer to the reading—and maybe narrow down some of the possibilities here…