Reading the Lenormand for the New Moon in Scorpio

After uploading this week’s Lenormand outlook video reading to my YouTube channel (which I didn’t get to the transcribe because I was hit with a severe migraine that I’m really just now recovering from), a viewer pointed out that the video didn’t address the New Moon in Scorpio that was going to take place on 11/11, like previous videos had when we had those eclipses alongside a new moon or full moon.

Honestly, I knew it was coming, but I’d forgotten all about it when it came time to shoot the video.

And knowing what I know now, I can see the Universe was at work it Its wonderful and wondrous ways.

For one thing, the video that was shot was not only spot on for a couple of viewers, I had a person share with me the exact experience I talked about in the reading while it was still in the post-production stage (which is something that seems to be happening a lot these days, which is a nice validation of the work).

The other thing is that I began toying with the idea (uh-oh!) of changing up the layout used in the readings in some way, just to continue to keep things fresh for everyone involved.

So, when that viewer reminded me of the coming new moon, I thought this would be the perfect opportunity to present a reading I call “Crossing the Center.”

Taking the Mystical Lenormand, by Regula Elizabeth Fiechter and Urban Trösch, in hand, I shuffled the cards, pulling five to answer this question: What do we need to know about the energies coming in with the New Moon in Scorpio on 11/11?

The video below presents the reading:

If you prefer to read the text, here you go:

Rather than laying out the cards in a line from left-to-right, as I would do for a Line of 5, I laid them out in a cross formation. 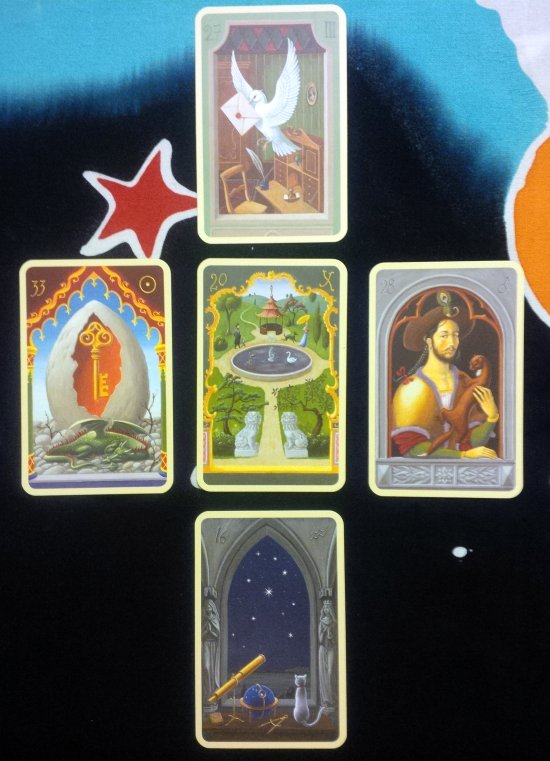 The central focus is Garden, which is a card of other people; it highlights groups and communities.

I read this as suggesting that the energies coming in with the new moon could usher in a period in which we (Garden as a collective) begin to become more focused on communities of all kinds.

For some people, that focus will be on their local communities; for some, it may be more social and environmental groups; for others, it may be grass roots and political movements. And going bigger than that, there may be more people focusing on worldly and global causes.

Stars, in the position of the root and foundation, says to me this is a time of seeking guidance and direction. I tend to be somewhat existential, so I can see this as some people might be seeking guidance and direction about their place in the Universe (Stars) and how they fit in the grand scheme of things, which might lead them to find the place (Garden) in which they will best serve.

Stars, as a way to become more clear (Stars is a card of clarity), invites the question of what inspires us. Is there a cause or movement (Garden) that calls to us, in terms of actionable service (Garden being a card of community and public service)? And not only what inspires us—but what do we aspire to be(come)?

I also see Letter as a manifesto of service, which is a public declaration (and fits nicely with the pairing of Letter + Garden).

To the left of Garden, we find Key. Key is a card of answers and solutions, of discoveries, revelations, and breakthroughs. Key says this is going to be an important time for us collectively. It will also be significant for each person becoming more conscious and “waking up,” as the symbol of the key within the egg, as one of the viewers of the video so aptly put it, that we will find the answers (Key) we’re seeking by going within.

And, to the right of Garden, we find Gentleman. In the position of what could be coming up in the future, this card simply says that it will involve a man. So, if you’re a woman reading this, Gentleman indicates a man close to you. If you’re male, then Gentleman represents you.

For more information, we can look at the cross in three distinct ways: the horizontal row, the vertical column, and then the diamond of cards around the central card. 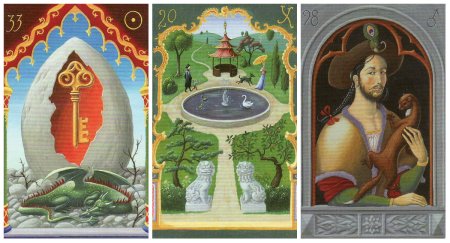 Going with the horizontal row of Key, Garden, and Gentleman, we have three pairings:

The line of Key + Garden + Gentleman could be read as: the importance of community for the man; the discovery of a group for the man; revealing the community to the man; and an important social event for the man.

Turning attention to the vertical row, again, there are three pairings:

Moving to the diamond formed around Garden, we have four possible pairings:

The line of cards could be read as: A message (Letter) of important (Key) guidance (Stars) is received by the man (Gentleman + Letter), which he shares with the community (Garden, bringing it back to the focus card).

One possibility is that the man (Gentleman) is a channel (Stars + Gentleman) receiving a message (Gentleman + Letter) from a group of guides (Garden + Stars), much in the way that Esther Hicks channels Abraham (which is a collective, not an individual).

The message (Letter) is of a universal nature (Garden + Stars), about the importance (Key) of the group consciousness (Garden) becoming more clear (Stars) about its direction (Stars) in the coming new age (Garden + Stars).

The cards, from this perspective, take on a very spiritual flavor.

The 7th card in the deck is Snake.

I normally read Snake as a card of complications and complexities. For me, Snake can suggest a long and winding process.

But, the Universe has given me a little wink here—it’s in the form of the astrological glyph in the upper right corner of the card. The glyph is the sign of Scorpio—the very sign the new moon is moving through this week!

The new moon, from what I understand, is about setting new intentions. The snake, in that regard, is known to shed its old skin in a transformative process. And, while this is not a Lenormand technique, I see the repeated symbol of the egg (life) on this card that was also on Key. The egg is a symbol of new life.

One way to bring it back to the Lenormand meaning of Snake, I could say that the card is possibly making a reference to the complexities and complications of life (which reminds us that we’re spiritual beings having a human experience).

Wrapping things up, I leave you with this thought: What will you be shedding (releasing the old) and hatching (embracing the new) this week—and what intentions will you be setting to honor both those processes?