So glad you’ve dropped by! I hope you had a nice holiday weekend!

And as things return to normal (and that being relative—no pun intended!), and we start gearing up for the next holiday, it’s time for this week’s Tarot reading.

And since last week’s reading was met with positive response (and the message of the Life Experience card did indeed find its intended recipient, besides yours truly), I’m returning to the Fairy Tarot Cards, by Doreen Virtue, Radleigh Valentine, and Howard David Johnson, for its assistance again this week.

With deck in hand, I’m shuffling the cards with this question in mind: “What does Spirit, the angels, and the fairies want us to know for the week ahead?”

After shuffling the deck, I turned the entire deck over to show us the base card, which I consider the foundation for the week. 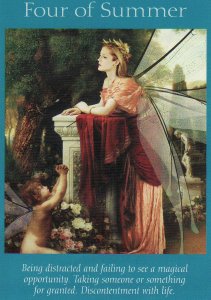 The card is 4 of Summer.

This is known as the “Divine Discontent” card. It can suggest boredom, and a sense of dissatisfaction with life. 4 of Summer can come up when we’re in a rut, when it seems like things are the “same old, same old.” It can mean it’s time to evaluate (or re-evaluate) things.

We may be yearning for something different, just as it appears the woman fairy might be as she leans forward, gazing ahead. We might be asking for assistance, for a sign from the Universe that would wake us up from this state of ennui.

When this card comes up, we’re being put on notice to pay attention—that help is being offered to us—but we’re failing to notice because we’re caught up in the distractions and preoccupations of our discontent; this is symbolized by the little cherub fairy pleading with the woman fairy to notice him—and she is overlooking him.

When I see this card, I see it as saying that the sign we’re looking for may not be the flashing neon variety, but, rather, like the little cherub fairy, it might be small and subtle. It might be within your peripheral vision—or, like in the image on the card, right under your very nose.

Moving on to pulling cards from the deck as I feel led, I pull three: the first for the beginning of the week; the second for the middle of the week; and the last to round out the rest of the week.

The cards are: Unity, Princess of Winter, and 5 of Autumn.

The cards for the week: Unity, Princess of Winter, and 5 of Autumn, from the Fairy Tarot Cards. 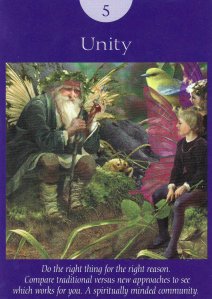 For the beginning of the week, we have Unity. Unity, being a major Arcana card, carries weight in a reading, as it can suggest important issues and events.

This card makes sense in this position, as we return to life after a holiday weekend. Unity can represent traditions, families, and rites of passage. It can represent holidays, in the sense that they are “holy days,” as Unity can sometimes represent the Church and traditional spiritual traditions.

Another thing Unity can suggest is that we might be faced with having to examine (going back to 4 of Summer) our beliefs in some regard, because Unity can represent belief systems.

But, with that, comes an issue about approval. Do we believe what we believe because we get the approval of certain people—and we fear their disapproval if we now—for whatever reason–believe differently? 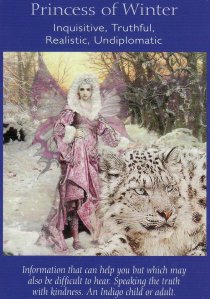 And, finally, we might be introduced to a teacher who gets us to learn something new, which is a nice segue to the card for the middle of the week, Princess of Winter.

Princesses, for me, can represent a learning stage of development. This particular Princess embraces a new idea or concept and runs with it. The person this card is referring to is the inquisitive and curious type. If this were a child (and Princesses can actually mean a child), this child would be the one who is always asking, “Why?”

And this might be the approach we could adopt this week in examining some of those belief systems indicated by Unity; we might find ourselves asking, “Why do I believe what I believe?”

And, if we decide to believe differently, Princess of Winter could mean that we might try to impose our new beliefs on people who are not quite ready to hear what it is we have to say—or that we might be on the receiving end of information that we’ll find difficult to hear. 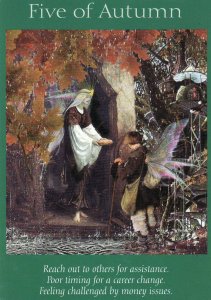 Either way, this moves us to what might happen at the end of the week, with 5 of Autumn.

5 of Autumn can suggest the possibility of getting that help we’re seeking indicated by 4 of Summer. This is a card of having physical needs and seeking assistance to have those needs met.

I typically see this card as being an outcast or outsider, as being on “the outside looking in.” It might be coming from that place which causes us to re-examine and change certain beliefs we’ve held. It could mean making a change (the number 5) from a traditional, conservative type of group or institution (Unity) to a more non-traditional or unconventional (like, in my case, moving from the mainstream to the more metaphysical with my work/career).

In terms of sharing ideas and information (Princess of Winter), 5 of Autumn could indicate that the very information we’re learning and sharing—which may become our new Truth—may be ignored and rejected.

Another thing we might be faced with is our beliefs about money, as 5 of Autumn can suggest worries and anxieties about finances, and Unity is associated with Taurus, the astrological sign of money, possessions, and ownership.

For some, who are self-employed, this card can suggest a time of “feast or famine,” that the work you do might be prone to “cycles,” as I have believed about the very work I do now.

I was good for saying that my business is “cyclical,” that certain times of the year were better for readings than others. But, what I was doing was affirming a lack/poverty consciousness (another aspect of this card), and I had to take a closer look at my “money story,” which is comprised of the beliefs I learned about money from my family (Unity).

For others reading this, with the combination of Unity and 5 of Winter, you might be waiting on some type of financial approval.

Before turning to the Lesson card, we have a bonus card this week. For me, when a Princess card appears, I see it as a messenger, wanting to offer a particular message, which comes from pulling an additional card. 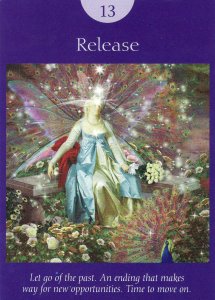 Shuffling the deck, and asking the Princess of Winter what news or message she wants to share, I pulled Release.

Release is a card that means—in one word—change!

Release, like Unity, is a Major Arcana card, which means this process of change we’re undergoing is–well–major. Release indicates a significant transition and an important transformation being possible.

The card reads, “Let go of the past. An ending that makes way for new opportunities. Time to move on.”

If you look at the image on the card, it looks like the woman fairy sitting on the bench is receiving a download of information (the orbs of light coming down to her crown chakra), keeping with Princess of Winter learning new information. As a result of that “download,” she appears to have peacock feathers emerging from her, like the peacock in front of her. She is changing as a result of this new information coming in.

When it comes to beliefs, in order to embrace a new belief, an old, outdated belief has to be “released.”

To round out this reading, I’ll take the numbers on all the cards, reducing them to a number between 0-22, seeing what Major Arcana card will be the Lesson card for the week. 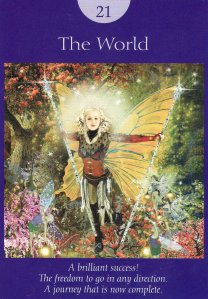 The World is a card that can suggest a triumph, victory, or success; it signals reaching the successful completion (like Release being a card of endings and completions) of a phase or chapter in your life.

The World suggests reaching a higher level of awareness. With that in mind, The World can suggest coming full circle; you’ve arrived back at the point where you started, but you have so much more awareness about things than you did before.

In this sense, The World is about reaching a state of wholeness. An important goal has been achieved, and all the feelings and experiences that go along with it.

If Unity is a card of learning and educational institutions, The World is graduation from those institutions. It’s taking what you’ve learned out into the world—and to a whole new level.

And, with that, I’ll bring this reading to its completion…