Before jumping into this week’s reading, I first want to thank you for the continued support I’m receiving regarding the Angel card readings I’ve been posting in this space. The previous Angel Card reading, to my surprise and delight, surpassed the first, with regard to its resonance with viewers (the video) and readers (text portion).

Taking each deck at a time in hand, I’m shuffling, asking Spirit and the Angels for the messages we need at this point in time to best assist us in moving through the upcoming week.

The video presentation of this week’s reading is below:

If you prefer to read the text, here it is for you:

Foundation for the Week 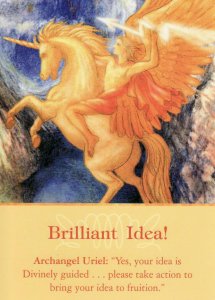 For the foundation of the week, I pulled Brilliant Idea!

Brilliant Idea! can indicate this could be a week of sudden insight. Archangel Uriel, the angel of illumination, holds a lightening bolt, which, for me, symbolizes a flash of insight that comes without warning, much like a bolt out of the blue. We call these experiences a-ha moments and revelations. Think of the times when, like in the cartoons and comic strips, your “light bulb has gone off,” and you get the (bright) idea (yes, that pun was intended).

Archangel Uriel works with us to help us become clear through ideas, insights, and epiphanies. For me personally, I call Uriel the “psychologist angel,” as he’s worked with me while I was in both undergrad and grad school, working to earn my psychology degrees. As a result, I see his energy as illuminating us as to our own psychological blocks, the unconscious habits and tendencies that keep us from moving forward.

That last sentence is a nice segue to the unicorn Archangel Uriel is riding. The unicorn, being a horse, symbolizes progress and moving forward. So, the duo sends the message (angels being divine messengers) that it’s not just going to be about getting that flash of insight, that epiphany, that revelation—it’s also about taking some action with it. I’m getting the sense of “taking an idea and running with it” this week.

And the card backs up that thought by stating, “…please take action to bring your idea to fruition.”

Now I’m turning to the three cards I pulled for the reading. The first card will represent the beginning of the week; the second card the middle of the week; and the third card will round out the week.

Blessing in Disguise, from the Daily Guidance from Your Angels Oracle Cards. Artwork by Kevin Roeckl.

For the beginning of the week, I pulled Blessing in Disguise.

In the image on the card, an angel sits on a cloud, gazing ahead. This carries the idea that, at the beginning of the week, you might be “up in the air” about a situation. Air symbolically can represent the mind (which is your “mental atmosphere”) and the imagery can suggest something being on your mind and in your thoughts.

If you’re focusing on what you see as a problem, Blessing in Disguise is asking you to consider taking the perspective that somewhere within the problem lies the answer. If you look, the bottom of the cloud the angel sits upon is lighter that the rest of the cloud formation, suggesting the cloud has a “silver lining.”

The angels are saying this is the same for your situation. The energy of the angels is meant to uplift us, to help us raise our vibrations. When you raise your consciousness, you also rise above the vibrational frequency of the problem. And when you rise above it, you can then see it differently, and that creates the space for the solution (that flash of insight) to come into the picture.

Energy Work, from the Daily Guidance from Your Angels Oracle Cards. Artwork by Steve A. Roberts.

For the middle of the week, I pulled Energy Work.

The first thing that strikes me about Energy Work is the image of the angel watching over the infant. This can suggest that there might be an issue pertaining to the care of an actual child, or that there may be a new duty or responsibility that needs to be taken care of. Consider what in your life is your “baby,” and how that might need your attention in the middle of the week.

The angel on Blessing in Disguise faces this card, so it could be that the concern has to do with caring for the needs of others, and how that might be affecting your energy level. If you’re finding your energy being depleted by all the work that you’re currently doing, you may also be feeling a sense of having to do everything by yourself, and this situation may have you wondering why this might be the case. 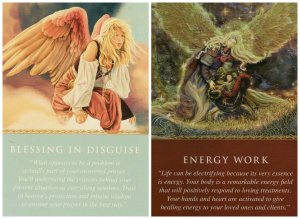 The angel on Blessing in Disguise facing Energy Work could suggest you taking the time and energy to see what the lesson is for you in this situation. Is it true that everyone needs you—or that, quite possibly, you’re operating from a need to be needed and over-committing yourself? The situation could be happening for you to consider empowering those who can take care of themselves to do so—which would also allow you to practice better self-care.

And this card being about energy work could suggest that it might be beneficial to receive a healing treatment from an energy healer/worker; for me, Reiki is the thing that comes to mind first, being a Reiki practitioner myself, but modalities like Healing Touch and Quantum Touch could also apply.

Energy Work sends the message to consider the “energy” you’re applying to the situation, and ask yourself, in Dr. Phil fashion, if that’s “working” for you or not. If not, you might get that flash of insight (Brilliant Idea!) about the tweak you could make so that it could work for you, rather than working against you.

Cupid, from the Daily Guidance from Your Angels Oracle Cards. Artwork by Kevin Roeckl.

Coming to the card for the end of the week, I pulled Cupid.

The first thing I notice with the Cupid card is that the angel on the card looks like a child, reinforcing a possible situation involving a child and parent.

If you notice, the angel on this card faces Energy Work, much like the angel on Blessing in Disguise. These directional cues reinforce the Energy Work card as the central focus this week.

On this side, Cupid, being the angel of love, could be asking you to see your situation with the eyes of love, which is how the angels see things. The angel, blowing bubbles that become heart-shaped, is sending the message to breathe love into the situation, as well as into the other areas and aspects of your life. 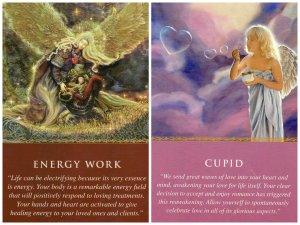 And since I mentioned blowing bubbles, I see this card as bringing more of a carefree, spontaneous, playful attitude to life. With Cupid facing Energy Work, the word “work” stands out, and brings to mind the idea that “all work and no play makes you a dull person.”

So, the message could be to either have a more playful attitude (fun) with the work you’re doing, or to create balance if you’re working too much.

Like the angel on the card, one of the things I do for fun is to go outside and blow bubbles—seriously. I have a couple of long bubble wands in the house, and blowing bubbles is a fun stress reliever. Maybe the card is literal, and asking you to consider engaging in that activity as a time of play.

It could also suggest that you not let anyone “burst your bubble” at the end of the week.

Whatever the specifics of your situation, with Blessing in Disguise and Cupid both facing Energy Work, your work this week might be treating the situation with healing energy. Doing so may create a more positive response for you and others who may be involved.

Final Advice from the Angels 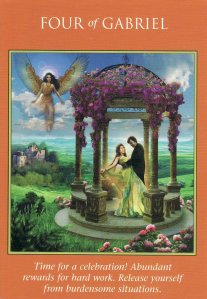 4 of Gabriel, from the Archangel Power Tarot Cards. Artwork is by Jeff Bedrick.

Pulling the final advice card for this week’s reading from the Archangel Power Tarot, I have 4 of Gabriel.

Archangel Gabriel, being the chief messenger angel, sends the message, with this card, that progress is being made (reinforcing this from the unicorn on Brilliant Idea!), and to take time to celebrate that progress.

In the image, there’s a couple celebrating under a gazebo. This can mean that a particular relationship may reach an important stage or development, with the people involved preparing to move on to the next stage, which would make sense if you consider the love/romance aspect of the Cupid card.

This could mean that a couple makes the decision to move in together (this is a card of co-habitation), to become engaged, or to move from being engaged to becoming spouses. 4 of Gabriel is an acknowledgement of the progression of the relationship and celebrating that.

The suit of Gabriel is associated with work and business, so this could also pertain to a working partnership or team reaching a certain stage with a project and celebrating that achievement.

If, like I touched on with Energy Work, you’ve been carrying the workload of others, 4 of Gabriel is a reminder to you that teamwork is a collaborative process, and everyone on the team needs to be on board, each doing his or her part. It reminds me of an expression I once heard attributed to the Buddha: “Many hands make light work.” And the card does state, “Release yourself from burdensome situations.”

With the lightening bolt on Brilliant Idea! you might consider getting everyone together for a “brainstorming” session, to be able to let them voice some ideas about what would make things “work” for everyone involved. From my own experience as a manager, I’ve learned that people tend to “buy in” more when they have been heard, and their ideas taken up for consideration and taken under advisement.

Whatever the scenario, 4 of Gabriel says, with intention and some action, you could be seeing the “magic” of progress at work this week. The number 4 of the card can suggest that progress can come from laying a proper foundation, doing some re-structuring, and employing some discipline and effort into the situation. And once you see the progress, celebrate your hard work—as well as that of everyone involved.

And now that I’ve reached the end of this performance, it’s time for me to exit stage left.

Wishing you a week full of insight, epiphanies, and Angel blessings!