A Celtic Cross Reading with the Lenormand

Much to my surprise, I recently came across a video on YouTube by Chloe McCracken, the creator of the Celtic Lenormand, in which she demonstrated using the Celtic Cross with Lenormand cards.

While watching the video, I had one of those “Why didn’t I think of that?” moments. Since taking up the Lenormand, I’ve been working with 3-card spreads, Lines of 5, 9-card boxes, and the Grand Tableau. The Celtic Cross is something I had never considered—at least not until now.

After seeing the video, I was inspired to try out a Celtic Cross reading myself. Taking the Malpertuis Lenormand (by Neil Lovell of Malpertuis Designs Ltd.) in hand, I shuffled the cards with this question in mind: “What do I need to know about using the Celtic Cross Spread with the Lenormand?”

Below is a photo of the cards that came up in the reading:

My Lenormand reading using the Celtic Cross Spread. Cards are from the Malpertuis Lenormand by Neil Lovell of Malpertuis Designs Ltd.

The first card, Fish, fell in the position of the situation, and the word that came to mind was flow, meaning that the Lenormand is pointing out my concern about how the cards will flow together using this spread.

Next, in the position of crossing, was Clouds. Clouds here, in light of what I just said about the flow (Fish) is spot on, since it’s a card of confusion, doubt, and uncertainty. Clouds says I’m not sure how reading the Celtic Cross with Lenormand will work. 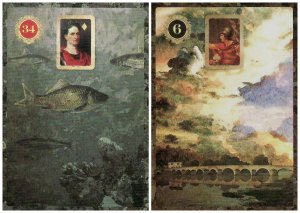 With the first two cards crossing, a pair is formed; Fish + Clouds can be read as an uncertain flow, or that flow is uncertain.

Sun fell in the third position, which is the root or underlying influence to the question. Sun says the question is rooted in success and confidence. Sun is asking for positive energy to be applied to the situation.

Mice fell into the fourth position, which is an influence from the recent past. Mice, for me, is a card of stress and worry, and can mean something is being lessened or diminished.

With the present (Fish) being connected to the past (Mice), another pairing can be taken into consideration. Mice + Fish can be read as a loss of flow or worry about the flow, both being variations of the concern brought to the table by Fish + Clouds.

Next position up is a goal, and Stars fell here. Stars can represent inspiration and the internet, which is how I was led to give this a try (Chloe’s video). Stars is also a card of divination, which also applies here.

In terms of a goal, the word that comes to mind with Stars is clarity. Stars is offering the inspirational guidance and direction that the flow (Fish) of reading the Lenormand in a Celtic Cross will become clearer the more I use it.

This is reinforced by pairing Stars + Sun, which says divination is successful.

Ship fell next, in the position of the near future. Ship is a card of progression and advancement, which is a positive indication to go forward.

Since the present can lead to the future, pairing Fish + Ship says there could be a progressive flow or that the flow will progress.

In the position of the self (me) is Dog. Here, the word that came to mind is loyalty, as I’ve been loyal to the Celtic Cross, in terms of it being my favorite spread to use as a Tarot consultant (consultant being one of my keywords for Dog).

In the next position up, the environment, Garden took this spot, which I found very interesting, given that Garden can mean other people (a group, a community, the general public or society).

When I work with a Celtic Cross, I sometimes look to the card in the past to see how it informs this card. With that in mind, I paired Mice + Garden and read it as worry about the community or worry about other people.

House, in the next position up, which I read as guidance or advice, answers this question by saying to do what I feel comfortable doing.

The final card, in the position of the probable or most likely outcome, is Cross. Given that Lenormand can be quite literal, I took this to represent the Celtic Cross itself; in that context, I thought it was cool to have it appear.

Going with that in mind, I paired the future and outcome cards, Ship + Cross, which could be read as progress with the Celtic Cross.

The pair could also suggest that using the Lenormand with the Celtic Cross could become necessary and critical (Cross) to my spiritual journey (Ship + Cross), especially if you consider Cross a card of karma or fate.

The Essence of the Timeline

While I paired up the cards in a number of ways, I used the cards in the past (Mice), present (Fish), future (Ship) and outcome (Cross) to form a timeline, much like the Essence Line in a 8 x 4 + 4 Grand Tableau.