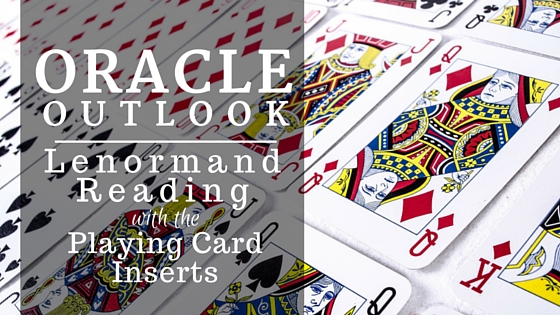 In my previous post, I shared a Lenormand card reading for this week’s Oracle Outlook.

What I’m going to do in this post, as a follow-up to that reading, is to take a look at the playing card inserts and the numbers of the cards for additional insights.

If you want to watch the video of the reading, you can check it out below.

If you prefer to read the text, here it is for you:

You may recall that the reading for the week, using the Piatnik Lenormand, consisted of Mountain, Fox, Coffin, Rider, and Tower.

The focus card, Coffin, informed us that an ending, closure, or something being finalized might take center stage this week.

The other cards around Coffin served to elaborate about this ending, describing more about the possible forms it could take this week.

Aside from reading the line, from the perspective of all the pairings of the cards, we can turn to the playing card inserts to see what additional information can be provided about this ending.

On this side of Coffin, Mountain + Fox suggest job challenges and a setback with either employment of self-employment. Stork, in relation to that, suggests change or improvement, with the possibility of some “movement,” with stork being a bird of migration.

Coffin, being the central card, can suggest that the change (Stork) could either lead to the ending (Coffin) or that the ending itself is the impetus of change and improvement.

And Stork being the Queen of Hearts, a face card, can suggest a woman may play a part in this, perhaps being the employee or self-employed person indicated by Fox. 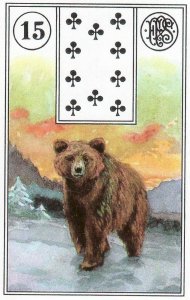 On this side of the line, Bear is a card of power, strength, and force. Given that Tower is also on this side, and is a card of an institution, a company, or a corporation, Bear can then take on the role of the manager, the supervisor, and the authority, as I call Bear the “boss” card.

With Rider + Tower being official news from a company or corporation, Bear could suggest news coming from the boss at the top, or a senior manager in the firm, perhaps instituting a policy, rule, or regulation (Tower).

Another possibility here is that an employee (Fox) makes the transition (Coffin) to becoming a manager (Bear), and news (Rider) of the promotion (Tower can suggest elevation) being made official (Tower).

After looking at the dynamics, I like to add all the playing cards up for any last advice this feature of the Lenormand wants to share.

Tree is a card most associated with health and healing, and Coffin (the central card) is a sharp contrast, as it can be a card of illness. With this in mind, Tree could be making the reference that the institution in question (Tower) could be one of a healing nature.

If we consider the employee becoming a manager, Tree could then suggest a “branching out” of sorts. Tree is also a card of patience (trees take time to grow), which could add that this transition (Coffin) has been a long time coming.

Getting to the Essence 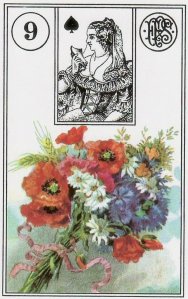 Now that we’ve looked at the playing cards, let’s round out this week’s reading by seeing what the essence card is.

Bouquet is a card that speaks about a gift, a surprise, or an invitation. Given that most of the reading this week seems to have taken on a job/employment tone (or at least that’s my perspective), Bouquet can be a card of talent (with Fox as skill) and having that talent being appreciated.

Bouquet is a card of something being wonderful and beautiful. So, as the final card, Bouquet can suggest that what started as a challenge (Mountain) transitions (Coffin) into something wonderful.

And there you have it; we’ve reached the end of this week’s reading. Thanks for joining me in this space for another Oracle Outlook; I hope you found the reading interesting, informative, and insightful.

I’m hoping you have a wonderful week, and I look forward to you joining me here again for the next Oracle Outlook!