It’s Monday once again–and that means it’s time for another Oracle Outlook!

The deck assisting me for this week’s reading is the Universal Waite Tarot by Arthur Edward Waite & Pamela Colman Smith, with coloring by Mary Hanson-Roberts. It’s published by U. S. Games Systems, Inc.

After shuffling the deck and pulling the three cards for this reading, I turn the remainder of the deck over to look at the card at the bottom, which I consider the foundation for the week.

Foundation for the Week 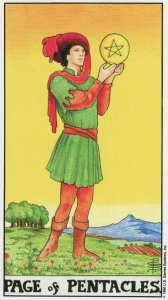 The card is Page of Pentacles.

Keeping with the learning aspect of the Page, this is a person who is a student or scholar; if not actually enrolled in college or university, this is the person who is considered a “student of life,” someone who’s a life-long learner.

When the Page of Pentacles appears, it’s about the value gained from the learning experience—and putting those lessons learned into practical application. Keeping with the student slant of this card, it’s about making that education “pay for itself.”

And since I mentioned the word “pay,” the suit of Pentacles can also represent monetary and financial matters. The Page of Pentacles, in this context, can represent a new stage of development where money is concerned. Since he’s the life-long student, having this card show up can indicate learning something new about money and finances (I’m seeing “learning the value of a dollar” in my mind as I type these words).

Pages in Tarot, for me, can represent news and messages. When a Page appears, I pull a card from the deck, asking for further insight as to the possible nature of the news or message.

Pulling the next card from the bottom of the deck as a message from the Page of Pentacles, we have Death.

Death is one of the most misunderstood cards in the deck. Many naturally assume, due to its name, that it means someone will die. The Death card doesn’t mean physical death; rather, it suggests you may find yourself going through a major process of change this week.

This is the card of endings, completions, transitions, and transformations. As things progress to their natural conclusions, this card can also signal a new chapter beginning. Death is a “rites of passage” card, as there can be no beginning without an ending.

You’re being encouraged to examine how well you embrace change in your life this week–because there’s one only constant in life, and that’s change.

Death wants you to know that not all change has to be met with fear, although it’s understandable when you consider there’s the unknown element or factor that accompanies all forms of change. I see this as meaning it’s not about the change process itself, but what lies on the other side of that process–for we don’t know.

Consider the changes and transitions you’ve experienced in your past. How have those outer experiences opened the door to your inner transformation? What changes will you make for yourself and your life as a result of that transformation?

Moving now to the three cards I pulled: the first for the beginning of the week; the second for the middle of the week; and the last to round out the rest of the week.

For the beginning of the week, we have The Hanged Man.

The Hanged Man is a card that can indicate a period when it appears things are in limbo. It’s a card of setbacks, delays, and things being put “on hold.”

This week, The Hanged Man is encouraging you to consider how you can see the people and events in your life in a different light (symbolized by the nimbus of light around his head, which is enlightenment).

Part of that process is coming to a place of acceptance–being willing to say, “This is the way it is,” which then leads to the art of learning (bringing back in the Page of Pentacles) to let go.

I’m reminded of a quote from author Mark Nepo about sacrifice: “Sacrifice is giving up what no longer works.” With this different perspective (the pun is intended) on sacrifice, how does it help you consider what’s no longer working for you in your life—and would you be willing to give it up?

Moving to the card for the middle of the week, we have the 5 of Swords.

The 5 of Swords is known as “the price of victory” card–which means that a victory can come with a price or cost to you–are you willing to pay it?

This may be the week where you draw your line in the sand and set some much-needed boundaries.

Since Swords is the suit associated with communication, be mindful of getting into quarrels and arguments with others this week. There are better ways to get your point across than bickering. Saying things to embarrass and humiliate others will not win them over.

It may be the better part of valor to walk away from a fight than to remain engaged. Pick and choose your battles carefully–you won’t win every time.

Or, since the suit of Swords is also about problem-solving and decision-making, consider this alternative: What would you be willing to forfeit (a nod to The Hanged Man and sacrifice) to create a win-win for everyone involved? 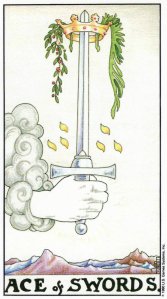 For the end of the week, we have the Ace of Swords.

The Ace of Swords signals a triumph, a victory, or a success coming your way!

Aces herald the beginning of a new chapter, stage, or phase in your life. For me, the Ace of Swords can suggest the beginning stages of a new lifestyle, and part of that could mean a job or career change.

This particular Ace often means a new thought, idea, or concept suddenly coming to you that gives you clarity, that presents the answer or solution to a problem you’ve been experiencing.

And since I mentioned problems, the suit of Swords is a suit that’s known to represent challenges. The Ace of Swords, in this sense, could suggest a bumpy start on the way to things becoming clear, or leading to that triumph, victory, and success.

Also, Swords can represent the way we communicate, and that words are double-edged: they have the power to both harm and heal. How will you use your words this week? (Remember the 5 of Swords?)

The Ace of Swords, being a card of Truth, asks you to stand in your truth—and to be truthful—without intentionally causing harm to others. Because the Truth is that what we inflict on another will be inflicted on us.

The Ace of Swords points (another pun intended) to the crown chakra, and the possibility of getting a “download” of (intuitive) information from the Divine (with the Ace of Swords, I refer to the Divine as the One Mind, Divine Mind, or Infinite Intelligence).

With that, the Ace of Swords could be offering the advice to keep an open mind should you receive such a download, as it might present a new concept to you.

To round out this reading, I’ll take the numbers on all the cards, reducing them to a number between 0-22, seeing what Major Arcana card will be the Essence card for the week.

Essence Card for the Week

The Moon is asking you to be guided by your intuition, following Ace of Swords and its message about the possibility of receiving a download of intuitive information.

Intuition is subtle and speaks softly. It is, as symbolized by the dog and the wolf on the card, instinctual; it’s a natural part of our being (considering we’re part of the animal kingdom).

Intuitive prompts often don’t make sense to our conscious, rational, analytical mind (again a nod to the suit of Swords, the dominant suit in this week’s reading), which is why the card’s backdrop is the night—the night symbolizes our subconscious mind and awareness.

The Moon is a card of heightened sensitivity, so be aware of how people around you may “trigger” emotional reactions and responses from you (remember the 5 of Swords?).

The Moon can suggest that emotional issues may come to the surface this week, and if that should be the case, they’re coming up to be healed.

Things come up to be acknowledged, and awareness is the first step toward healing and clearing issues that create all sorts of blocks in our lives.

And since I mentioned blocks, The Moon card is asking us to consider examining the things that we fear, as fear can create blocks, and keep us stuck. This brings back in Death, and possibly being afraid of change.

The Moon, a card of confronting our shadow and unconscious, is encouraging you to be proactive and ask yourself, “What do I fear? What scares me?”

But that’s just the beginning. Follow that with the question children (the Page, which started the reading off this week, can represent a child) so wisely ask: “Why?” The fear is the surface appearance; the truth (another aspect of The Moon is confusion and bewilderment) beneath the fear is in the why.

That’s all for this week—wishing that it’s a Tarot-tastic one!