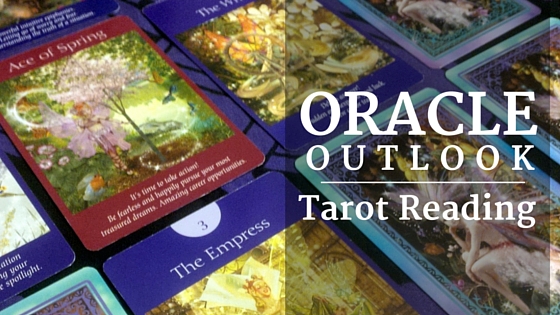 This week’s reading is being posted earlier than usual. I live in South Carolina, and, as I write this post, Hurricane Matthew is moving along the coast of Florida, making its way toward the Carolinas. 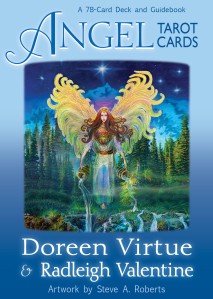 There is the strong possibility of being without power as the storm moves through this weekend, so I’ve decided to ramp things up and post everything before that happens.

Since I’ve been leaning on the protective energy of Archangel Michael a lot this week, during my time of hurricane preparedness, I thought I would turn to the Angel Tarot Cards this week to assist me for the reading. The Angel Tarot Cards are by Doreen Virtue, Radleigh Valentine, and Steve A. Roberts, and published by Hay House. 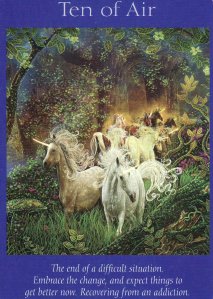 For the beginning of the week, we have the 10 of Air.

When the 10 of Air appears, things are coming to an end. I see the 10 of Air as a card of finalization; something is being completed—and once it’s done, it’s really over and done with.

For some, the 10 of Air can suggest the worst has happened. The 10 of Air can indicate ruin, which immediately brings to mind the potential for Hurricane Matthew to cause some ruin to the beaches along the coastlines of Florida and South Carolina–and possibly to some properties within those coastal communities.

When the 10 of Air suggests severe circumstances and conditions, it can advise prayer as a course of action. The suit of Air can be associated with Archangel Michael, as we can ask for the cords of fear and worry to be cut (by Archangel Michael’s sword of truth), helping to become calm and have peace of mind.

The lighter side of the 10 of Air asks you to examine the thoughts that keep you stuck. Fear paralyzes us, causing us to choose inaction as a response. The same can be said for over-thinking a situation, which causes “paralysis by analysis.” The same holds true for (self-) doubt.

And sometimes we need the message to come in a melodramatic way so it will get our attention and wake us up. When this is the case, the 10 of Air is asking us to stop having that “Young & Restless” moment—and turn off the TV. You don’t need the drama anymore (I always hear Mary J. Blige singing “No More Drama,” which has strains of “The Young and the Restless” in the song).

For the middle of the week, we have the 3 of Earth. The message of the 3 of Earth is to put your focus and dedication into mastering your craft.

This is one of the “work” cards from the suit of Earth, and it’s a notice that success can be attained through focus and hard work.

It’s a positive card that says progress will be gradual—and it urges you to put your creative talents (the number 3 is the number of creativity and self-expression) to good use. The message is to use your talents wisely, and you could gain a quiet and solid satisfaction from your work as you advance in your craft.

Being a work card, the 3 of Earth can suggest self-employment or work that builds into a long-term career (this is a good card that can indicate promotions and moving up the ladder).

Whatever the profession, the 3 of Earth is a solid indication that you have a reputation for the skill, talents, and abilities you possess (this is a card of having your work noticed by others).

It may be time to get into a formalized study program, as the 3 of Earth can indicate getting the education and training needed and obtaining a certificate or diploma. I saw this card a lot, in my personal readings, when I was pursuing my Masters in Psychology, as this card is also known as the “master craftsman” card.

Whatever the plan (this card is about implementing plans), now is the time to perfect your craft.

With the slant on implementing plans, the 3 of Earth can be known as the architect card, and for me, personally, can come up when damage has been done and things need to be repaired. In the physical sense (Earth being the physical), this can refer to the damages brought by Hurricane Matthew, and the assessment and clean-up after.

This can also suggest the rebuilding of a relationship, hoping to repair damage done by one or both parties. The 10 of Air, the card coming before 3 of Earth in the reading, is about having suspicions and  doubts, and the possibility of betrayal, or a situation that is filled with a lot of (melo)drama. The 3 of Earth can be the result of a situation connected to the 10 of Air.

In either case, cleaning things up may take both time and work.

For the end of the week, we have Justice, weighing in with a message to seek balance and gain equilibrium, symbolized in the image by the scales and the pillars.

At the end of the week, if you need to make a decision of some kind, Justice encourages you to look at the situation from all sides, to weigh the facts and the evidence, to weigh the pros and the cons, so you can make the decision from a place of being well-informed (which is symbolized by Archangel Raguel holding the scales of justice).

If other people factor into the situation in any way, Justice suggests striving for the best and highest good of everyone involved (which includes you!). You’re being asked to demonstrate fairness, neutrality, and impartiality, which will help others release their own biases and prejudices. Archangel Raguel is the angel associated with this aspect of justice, as he helps to bring about reconciliation and compromise.

Taking things to a higher court, Justice is also about the Spiritual Law of Cause and Effect. The Law is “no respecter of persons,” and operates the same for everyone, whether one believes in it or not (it’s the impartial aspect of Justice). In this sense, everything works for the best and highest good of everyone all the time–despite how the outcome appears.

The raised sword held by Archangel Raguel shows us this double-edged aspect of justice: On the one side, justice is about fair and just decisions; on the other, justice is about accountability, demanding that we stand in our integrity, stand up for our convictions, and do the right thing.

If you’re seeking to gain closure with a challenging situation, as suggested by the 10 of Air, Justice can indicate mediation with an impartial, neutral third party, or considering what your recourse might be from a legal standpoint.

If we consider the aftermath of Hurricane Matthew, along with the repairing the damage suggested by 3 of Earth, Justice can suggest aid on the local and federal governmental fronts, going out to those severely impacted and affected by the storm.

Even though Matthew will have passed by this point, the pairing of 3 of Earth and Justice suggests that we may continue to hears news about recovery and rebuilding over the next few months (this pairing, for me, forms a time period of 3 months).

I invite you to join me in keeping those impacted and affected by Hurricane Matthew in prayer.

And, with that, I’ll bring this week’s reading to a close. I hope you have a Tarot-tastic week.