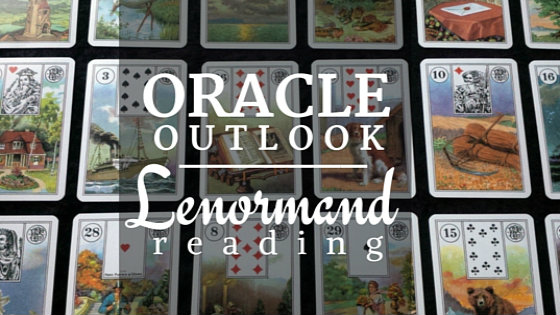 Before jumping into this week’s reading, I first wanted to let you know that I returned home at the beginning of last week (I left after posting last week’s reading due to Hurricane Matthew coming through the part of South Carolina I live in) and found my home exactly as I left it.

house suffered no damage, there was no flooding, and the power was on. I was very fortunate—and extremely grateful. I just had a lot of tree branches in my tiny backyard to pick up.

I had a number of people (through personal messages, as well as on my YouTube channel and on Instagram) offer prayers and positive thoughts for my physical safety, the safety of my family, and for protection of my physical property.

I wanted to share that with you, and say thank you for caring.

Getting into this week’s reading, the Lenormand is on deck, and I’m returning to my go-to, the Piatnik Lenormand. Taking the deck in hand, I’m shuffling the cards, asking what we might expect for the week ahead.

The cards for the week are: Clouds, Snake, Fox, Gentleman, and Book. 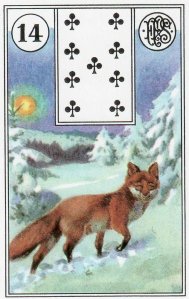 The focus card this week, which is in the middle of the line, is Fox. You may recall that Fox was the focus card the last time I did a Lenormand reading, which I find interesting.

Fox has its positive associations, as well as its challenging ones. On the positive side, Fox can indicate job and employment, and I see this as self-employment. With that in mind, Fox can talk about one’s skill and craft.

On the challenging side, Fox can talk about being cunning, and with that, the possibility of manipulation, of being taken advantage of. Fox can be about cheating, being conned and scammed.

Fox can also suggest something being bad or wrong, or that a mistake has been made. 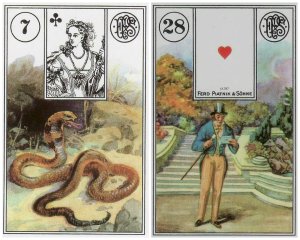 The cards immediately flanking Fox, Snake and Gentleman, form a pair that I read in a line as something more in-depth about the focus (Fox).

Snake, a card that’s no stranger to these readings (it appears often), can represent a complication, an entanglement, or a long and winding process. If Fox is about job and employment, Snake + Fox could be read as a job complication.

A possible complication, in this context, could be a rival (Snake) on the job. Snake has the inset of the Queen of Clubs, and can represent a woman. Tradition holds that the woman could have dark hair and wears glasses. With Fox, the woman could be intelligent (Snake), clever (Fox), and possibly cunning (Fox).

If Fox is about possible manipulation, then Snake can suggest that there is lying, and Fox would also add cheating to the mix.

Gentleman is a significator card, and represents a man in the situation. If you’re a woman reading this, Gentleman can point to an important man to you; if you’re a man, Gentleman represents you.

And since Gentleman only refers to a man, the surrounding cards serve to tell us more about the man, either describing his character, or the actions he is taking in the situation. Snake + Gentleman can then suggest a complicated man, or a complication with a man. Snake could suggest the man is entangled in a complicated situation (I’m thinking the expression “it’s complicated”).

Snake, a card about lying, can suggest lies about the man, or that the man is lying about an entanglement in his past (Gentleman is not facing Snake) that is now a complication in his present.

If we consider the Queen of Clubs, there could be a woman involved in the complication with the man. 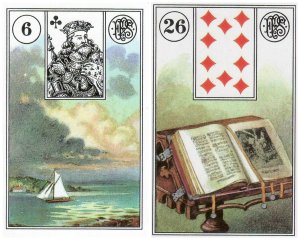 The outer cards, Clouds and Book, can offer information that would sum things up.

Clouds is considered the most challenging card in the deck; it brings an atmosphere of confusion, uncertainty, and doubt when it appears.

Clouds has an inset of the King of Clubs, the male counterpart of the Queen of Clubs (Snake); so, there may be a situation involving a couple—along with another man (Gentleman)—this week.

Where Clouds is about uncertainty, Book is about knowledge. Book can refer to learning, teaching, and education. In the image on the card, the book is open, which can imply the knowledge is accessible; it reminds me of being “an open book.”

Clouds + Book could be read as uncertainty about an actual book; a possible scenario is that something scandalous (Snake) is revealed within the pages of a book (Book).

If Fox is about job and employment, there may be uncertainty (Clouds) about education (Book) a man (Gentleman) received (Gentleman facing Book) to help him in the job market. Rather than helping him, it could now be causing complications (Snake) he didn’t see coming (Clouds behind Gentleman).

With Clouds and Book “bookending” the line this week, something unknown is learning about by week’s end.

With Clouds, Snake, and Fox all lined up, one after another, the knowledge (Book) may cause some sort of scandal (Snake), that involves lying (Snake) and cheating (Fox). And the complication (Snake) could very well entangle (Snake) a number of people (King and Queen of Clubs, along with Gentleman).

On that note, I’ll wrap things up.

Lenormand can offer a number of possibilities, so if you’re into Lenormand and see a different scenario playing out in the cards, let me know; I’d love to hear what you’re seeing.

For personal readings, please visit me at jameshimm.com to get all the details.