Since this week starts off with Halloween, I’m turning to the delightfully charming Halloween Tarot for assistance with our reading. The Halloween Tarot is by Kipling West & Karin Lee, and published by U. S. Games Systems, Inc.

As I do every week for these general readings, I’m taking the deck in hand, shuffling the cards, and asking, “What do we need to know about the possibilities for the week ahead?”

For the beginning of the week, we have the 5 of Pumpkins.

The 5 of Pumpkins can turn up when there may be concerns, worries, and anxieties around our physical well-being. Most often, those concerns can be attributed to money or health.

A possible change may be to drop what we no longer need (the child who has dropped a bag of candy collected), because, on some level, “it’s not good for us,” or to bring us back-to-basics.

From a health perspective, there may need to be a change the way we eat, and with that, eliminating sugar and other “sweets” from our dietary menus.

This might be a challenge, if the changes being presented are seen as a form of deprivation. The challenge of the 5 of Pumpkins can be having a poverty or lack mentality, and needing to work through that.

The most common lack experience we have centers around money, and that can create psychological spillover into other areas of life in which we believe we’re not getting what we feel we deserve to have.

The 5 of Pumpkins can come up when we need to check our belief systems (our “BS”) about abundance, self-worth, what we value, and our ability to receive, to be both allowing and deserving of the finer things in life.

The 5 of Pumpkins, when it comes to deserving, can suggest that in certain social circles, we may be experiencing being “out in the cold,” which means a form of isolation and rejection from a group.

We may then see ourselves as being on the “outside looking in,” and the only way to gain acceptance is to don a costume and play a certain role—one that serves to hide who we truly are.  Is it worth it?

It could also mean that, with the 5 of Pumpkins at the beginning of the week, we make the choice to reject the beliefs that no longer hold any value for us–which comes with possibly dropping the people, places and circumstances aligned with those particular beliefs.

For the middle of the week, we have the Knight of Bats.

Here, we have the Knight swooping in on his steed to save the day. Going with the 5 of Pumpkins, as a sign of needing possible help and assistance, the Knight can suggest help coming to us in the middle of the week.

Another possibility is that the Knight of Bats can suggest needing to make a decision quickly or to take a swift course of action to turn things around. This Knight is the fastest moving knight in Tarot, suggesting moving with a great deal of urgency.

This might mean doing some research or investigation for an answer to our situation, as a former work colleague of mine used to say, “with the quickness.”

I’m looking at the banner flag the Knight is holding, and it’s giving me the impression that a situation could “come up” that challenges our beliefs, or that has the ability to “raise” our consciousness to some degree, as the bat on the banner symbolizes our thoughts as it flies in the air, which is our mental “atmosphere.”

Again, this can be attributed to any sudden financial changes we might need to take action on, as suggested by the 5 of Pumpkins.

If we shift to the possibility of being on the outside looking in, and not having our needs acknowledged by those around us, the Knight of Bats can suggest taking a stand for ourselves. The Knight, holding up the banner in that regard, can send the signal that our thoughts and beliefs are just as important—and that we matter just as much as anyone else does.

But hold on a minute–! Sometimes this Knight, being associated with the astrological sign of Gemini, which rules communication, can suggest being sarcastic, curt, and to the point with our words—and may not be the best approach to take.

If you think that a conversation needs to take place, consider your words carefully—so that you can be heard, and not chase others away. 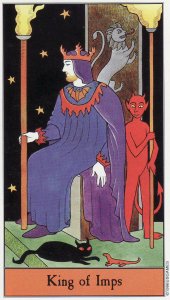 For the end of the week, we have the King of Imps.

I really love how the cards can work to follow-up on a previous point made. In this case, the King of Imps can be known for having tact and diplomacy, so this is a nice follow-up to the message about the careful use of words in stating the importance of your needs to others.

Kings in Tarot symbolize power, control, and maturity, so I see the King of Imps, at the end of the week, as coming into our own, reclaiming our sense of personal power that we might have let go of earlier in the week.

He wears a bat on the throat chakra area of his costume, again highlighting the importance of our words this week.

But not just our words; the throat chakra is about creative self-expression, and can be “communicated” in other ways than verbally.

I see this as arriving at the position in which we’re becoming more comfortable (the King looks comfortable in his position on his throne) with who we are, allowing us to not be (so) concerned with whether people around us approve or not.

If we consider that the 5 of Pumpkins is a card of our spiritual beliefs and a loss of faith in a particular system, the King of Imps can suggest a spiritual leader who can help us see things in a different light (the King hold a torch), reigniting a passion we thought was lost, and seeing how rich and rewarding our life can be (the bag of candy on the 5 of Pumpkins).

And, with that, I’ll bring this week’s reading to a close. I hope you have a Happy Halloween and a Tarot-tastic week!