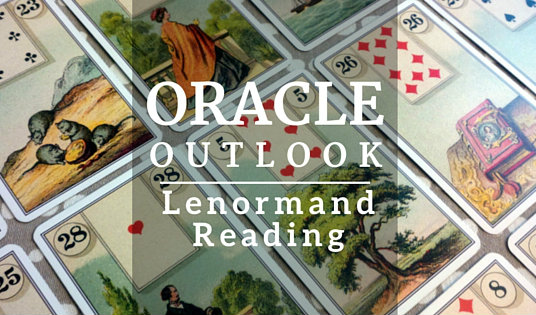 Over on my YouTube channel, I’ve been getting requests lately to post more videos on Lenormand Grand Tableaus (and I responded by posting a new one already), so I thought I’d use the Lenormand for this week’s Oracle Outlook reading.

Using the Lenormand deck (a variation of the Dondorf Lenormand) found in the Easy Lenormand set by Marcus Katz & Tali Goodwin (published by Llewellyn), I’m asking the question, “What do we need to know about the week ahead?”

The cards for the week are: Gentleman, Book, Crossroads, Cross, and Coffin. 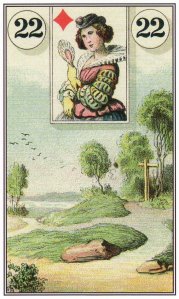 The focus card this week, which is in the middle of the line, is Crossroads.

Crossroads says that this week focuses on choices, options, and alternatives. Crossroads suggests reaching a figurative crossroads in our lives, and as a result, decisions may be reached—about where we’ve been and where we’re headed.

We may also have to consider the best ways, paths, routes, and avenues to take that will get us where we want to be, as Crossroads, at its core, can suggest choosing the best course.

As always, with Lenormand, more information can be gathered from the cards on each side of Crossroads, giving more details about these potential choices, options, and alternatives.

The cards immediately flanking Crossroads, Book and Cross, form a pair that I read in a line as more in-depth information about the central issue.

Book is a card of knowledge, education, teaching and learning. With Lenormand being quite literal, Book can refer to an actual book. With Crossroads coming after Book, the pair can suggest that knowledge (Book) leads to a choice or decision (Crossroads). 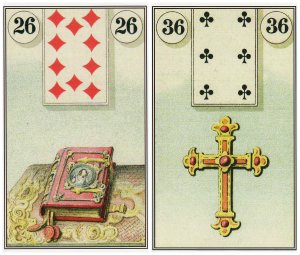 Being a card reader, I also see Book as a deck of cards, as cards are “read” just like books.

With this slant, the cards could be suggesting the study (Book) of card reading (book), and with it, considering the teachers (Book + Crossroads, as Crossroads can suggest multiples) and the best approaches (Crossroads) in that study.

Cross is a card of difficulties and burdens, so with Crossroads, the pair can suggest choices and decisions (Crossroads) that are or are becoming difficult (Cross).

And since I mentioned reading up on something, Book + Cross would suggest knowledge (Book) that’s critical or necessary (Cross), suggesting that the best choices are made when one is “well-read” on the options and alternatives in that decision-making process.

The outer cards, Gentleman and Coffin, can offer information that would sum things up. 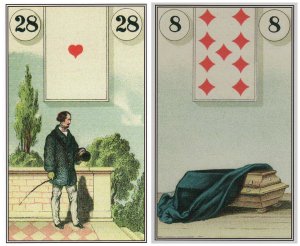 So, I’m paying extra special attention to this reading for myself this week! 😉

Coffin is at the other end of the line, and I find that interesting, as one of Coffin’s meanings is endings.

Coffin can mean completion, something being made final, or that some form of closure is taking place.

Pairing Crossroads with Coffin, the cards can be talking about a final (Coffin) decision (Crossroads), possibly as a result of options and alternatives (Crossroads) becoming limited or restricted (Coffin)—like a process of elimination, where options are narrowed down.

Gentleman, when paired with Coffin, is now facing the card, suggesting a man (Gentleman) is looking forward to something being finalized, or that he sees an ending or completion in sight, a situation where he’s been seeking some closure.

Coffin can also be a card of illness, so there’s the possibility of a man facing an illness and seeking options and alternatives (Crossroads) on his path to recovery. In the meantime, Coffin can suggest the man get bed rest or more sleep. 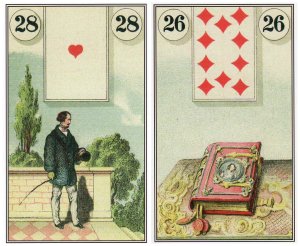 With Gentleman + Book, our fellow is now facing becoming knowledgeable, that he is going to be learning something in the future.

Book could also be describing the man as a teacher or student, or that he’s a writer, author, or novelist, with a book project coming up in the near future.

He could even be like yours truly and is a card reader (Remember I said I was paying extra special attention to this week’s reading? Book being next to Gentleman was another reason why.)

Going further, Book + Crossroads could suggest multiple card decks, so it could imply the man is going to be acquiring a number of decks this week (Oh boy, I’m in trouble…). 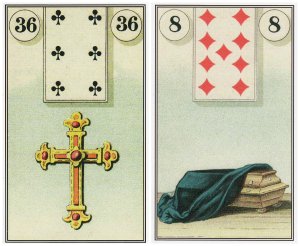 Cross + Coffin can be read as a difficulty or burden (Cross) comes to an end (Coffin), or that religion or spirituality (Cross) becomes limiting and confining (Coffin).

The pairing could also suggest that a period of suffering (Cross) with an illness (Coffin) could come to an end (Coffin).

Taking all the combinations and pairings into account, a possible summation of the line could be:

A man (Gentleman) seeks knowledge (Book) about options and alternatives (Crossroads)  leading to a choice or decision (Crossroads) that’s critical or necessary (Cross) for an ordeal (Cross) to come to an end (Coffin).

With Cross as a card of faith, it can suggest the man rely on his faith—or that he have faith—which will be critical in helping him through the situation.

Bringing Things to a Close…

On that note, I’ll bring this week’s reading to a close.

Lenormand can offer a number of possibilities, so if you’re into Lenormand and see a different scenario playing out in the cards, let me know; I’d love to hear what you’re seeing.