Since this is the week of Valentine’s Day, I thought I’d use an older deck in my collection for the reading: The Love Tarot, which is by Sarah Bartlett & Nancy Tolford.

It’s different from a standard Tarot deck in this regard: It only consists of the Major Arcana, the 22 cards that speak to important issues and events designed for our personal and spiritual growth and development.

And, going with that, another reason I was led to work with this deck is that I’m feeling (and I may not be alone here) that the world needs a lot of love and loving energy right now, in light of the things going on all around us these days (and weeks and months).

So I’m taking the deck in hand, shuffling the cards, and asking the question, “What do we need to know about the possibilities for the week ahead (and how might we go about bringing more love to these potential experiences)?”

For the beginning of the week, we have The Hanged Man, encouraging you to change your outlook.

The Hanged Man is a card that can indicate a period when it appears things are in limbo. It’s a card of setbacks, delays, and things being put “on hold.”

This week, The Hanged Man is encouraging you to consider how you can see the people and events in your life in a different light.

Part of that process is coming to a place of acceptance–being willing to say, “This is the way it is,” which then leads to the art of learning to let go.

I’m reminded of a quote from author Mark Nepo about sacrifice: “Sacrifice is giving up what no longer works.” With this different perspective (the pun is intended) on sacrifice, how does it help you consider what’s no longer working for you in your life—and would you be willing to give it up?

Moving to the card for the middle of the week, we have the The Moon.

The Moon is asking you to be guided by your intuition. Your intuition is subtle and it speaks softly. It is, as symbolized by the animals on the card, instinctual; it’s a natural part of our being (considering we’re part of the animal kingdom).

Intuitive prompts often don’t make sense to our conscious, rational, analytical mind, which is why the card’s backdrop is the night—the night symbolizes our subconscious mind and awareness.

The Moon is a card of heightened sensitivity, so be aware of how people around you may “trigger” emotional reactions and responses from you.

With The Hanged Man, you’re being encouraged to react and respond to these triggers differently than you have in the past. It suggests, that, if the way you’ve been reacting and responding hasn’t produced the result you want, it might be time to try something different.

The Moon can also suggest that emotional issues may come to the surface this week, and if that should be the case, they’re coming up to be healed.

Things come up to be acknowledged, and awareness is the first step toward healing and clearing issues that create all sorts of blocks in our lives.

And since I mentioned blocks, The Moon card is asking us to consider examining the things that we fear, as fear can create blocks, and keep us stuck.

The Moon, a card of confronting our shadow and unconscious, is encouraging you to be proactive and ask yourself, “What do I fear? What scares me?”

But that’s just the beginning. Follow that with the question children so wisely ask: “Why?” The fear is the surface appearance; the truth (another aspect of The Moon is confusion and bewilderment) beneath the fear is in the why.

For the end of the week, we have The Devil.

With this card, you’re being asked to look at the ways you block yourself; The Devil, being a card of limitation and restriction, is about roadblocks. It’s a card, though, that suggests these “roadblocks” are self-imposed, so as you move through your week, consider if any of your habits and tendencies are tripping you up.

You may find that there are roles you play in certain relationships and environments that have been imposed upon you by other people, and if these roles no longer serve and support you, The Devil card says you can make the choice to break free.

Here’s a little more on that…. The Devil is a card that, for me, can represent a long-term commitment. Depending on your beliefs (conditioning and programming), you could choose to see making a long-term commitment as getting “trapped” or you could choose to “be all in,” and possibly over-committing. And the result of over-committing could lead to blaming the people and the environment you’ve committed to, because they’ve “missed the mark.”

The Devil is also asking you to check yourself and to consider if you’ve been making unhealthy choices. You’re being encouraged to look at possible foods and beverages, and see if you need to limit or restrict how much of them you consume.

Sharing a personal example, I used to drink a particular caffeinated beverage every day on the job, when I was out in the working world before becoming self-employed. I discovered, that on my days off, I would have intense headaches because I hadn’t had this beverage. I realized (with the help of a dream, bringing in The Moon, a card of dreams) that the headaches were the result of my body going through caffeine withdrawal, and I quit, not only that beverage, but all forms of caffeine, because my body had become addicted to it.

So, The Devil card is a signal to consider what your “addictions” are (they come in many forms, from the benign to the detrimental and harmful), and how you might be allowing them to rule your life.

As the late Dr. Maya Angelou said, “When you know better, you do better.” This may be the time we’re faced with the opportunities that will allow us to know better, and as a result of that knowing, do better. 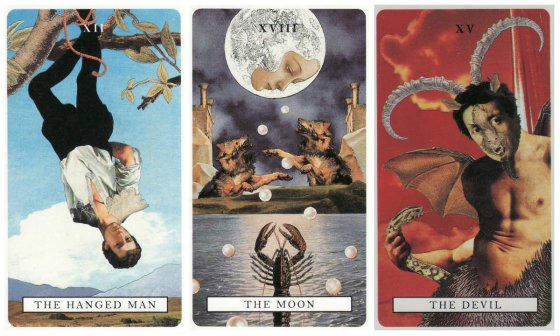 And on that (love) note, I’ll bring this week’s reading to a close and sign off. Thanks so much for joining me in this space and I look forward to seeing you here again real soon.

Hope you have a Tarot-tastic week!

These weekly readings are general in nature. If you’re interested in having your own personalized Tarot reading, please visit my Tarot Consultations page for all the details.