Last month, I offered my first reading in this space using playing cards. Since that time, I’ve been immersing myself with the playing cards more and more, and thought I’d work with them again for this week’s reading. 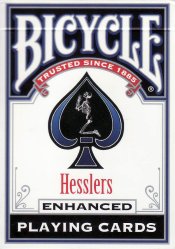 This time, I’m working with the Bicycle® Hesslers Enhanced Playing Cards, which were designed by Matt Hessler.

What I love about this deck is that, instead of the two colors of most decks (black and red), Matt chose to work with four, each suit having its own color (Hearts are red; Spades, blue; Clubs, green; and Diamonds are yellow).

For me, as a reader, these color changes create more visual interest when the cards are laid out.

So I’m taking the deck in hand, shuffling the cards, and asking the general question, “What do we need to know about the possibilities for the week ahead?”

For the beginning of the week, we have the Jack of Hearts.

The Jack is a “face” card, meaning that it can represent a person; when I’m working with the cards in a general context (like these weekly readings), I tend to look at the face cards as roles we can play or approaches we could adopt moving through the week.

With that in mind, the Jack of Hearts can represent Cupid, and is known as the “lover” card, which to me suggests a theme of love.

This reminds me of something I felt I said last week, and that was about our “love walk,” and how we can bring more love to our world through our everyday experiences. This is also making me consider the idea of falling more in love with life itself.

Hearts, as a suit, indicates feelings, emotions, and relationships, and Jacks are messengers, so we have the possibility of messages of love, or loving communications. How might we speak and communicate with love in our hearts for others this week?

It could also be, with the Jack as Cupid, that we’re “on the hunt” for love in our lives (possibly the romantic variety). Cupid can have a downside, though, and that’s being infatuated—which may not be love, but rather being in love with the idea of love.

The next card can offer more about this card, so moving on, we have the 4 of Hearts.

We have another card from the suit of Hearts, so this reinforces the focus being on feelings, emotions, and relationships this week.

From a feeling and emotional standpoint, Hearts ask us to have an outlook of being happy and optimistic as we go through the week.

The number 4 can represent laying a foundation; this can suggest a relationship being in its foundational stage, if you will, and we’re putting work into it (the 4 also represents work). It’s like laying the groundwork, so there’s something to build on for the future.

The 4 is also a number of stability and security, so this can suggest being in relationships with those who allow us to feel a sense of emotional security and stability, or that those components need to be a part of the foundation for future relationships.

Along those lines, the 4 is also a number of comfort, and makes me think of being emotionally comfortable, both in the relationship we have with ourselves, as well as those we have with others.

I’ve heard some cartomancers refer to this card as a “marriage bed,” because a bed has four posts and is in a room with four walls.

I bring this up because the cards so far could be referring to the possibility of a relationship becoming physically intimate, and both parties involved have to consider if the foundation has been established for the relationship to now move in this direction.

At this point, let’s take a look at the numerical values of the cards for an underlying influence. Taking 11 (Jack) and 4, they add to 15, which reduces to 6. 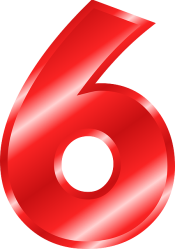 The 6 is a number of the home, so the idea here is about being “at home” with how we feel this week (and brings to mind the expression “home is where the heart is”), reinforcing the idea of being comfortable with our emotions.

The 6 is also a number that, when it comes up as an underlying influence, can suggest a conflict between responsibility and reward. This can suggest an energy of putting others (and their needs) before ourselves, and now wondering if and how that will pay off for us.

It reminds me of something I learned from doing my course work for my psychology degrees. I learned the idea that, as human beings, we are all motivated by some form of self-interest; everything we do—or don’t do—carries with it some reward or pay off, or else we wouldn’t engage with it or participate in it.

Basically, we’re asking ourselves the questions, “What’s in it for me? What do I get out of this?”

So, the underlying message this week is to consider what’s motivating us to do what we do this week. 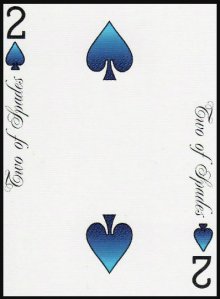 And, as we move to the last card, I can see why. Our last card for the week is the 2 of Spades, suggesting a possible bump in the road.

Spades, as a suit, can indicate challenges, obstacles, blocks, and hurdles. When Spades turn up, they serve as a heads-up, so we can consider the decisions we might need to make if and when these challenges appear on the scene.

Since the 2 of Spades now influences the 4 of Hearts, we’re being informed of a potential relationship challenge.

The 4, now influenced by the presence of a Spades card, can suggest a situation in which there’s some type of limitation or restriction being imposed, an emotional experience that may have once been comfortable, offering security and stability, may now become confining and uncomfortable.

The 2 is a number of relationship and co-operation; attached to the Spades, the 2 can suggest conflict.

So, this card can suggest a conflict within a relationship. Spades represent mental energy, so the conflict can be that the parties involved have opposing ideas about either the state of the relationship as it is—or where it could be going in the future.

And with that, it could be that each person isn’t taking into account the thoughts (Spades) and feelings (Hearts) of the other. The appearance of this card could suggest, instead of having an “either-or” stance, being willing to consider “and” or “both,” meaning the ability to reach a compromise.

And, if that’s not possible, then perhaps being willing to “agree to disagree.”

For the second underlying influence, we can taking the 4 and the 2, and, in doing so, we have a total of 6 again; within this context of challenge and conflict, the 6 takes on the energy of healing and harmony.

In order to have healing that restores harmony, the 6 offers that each person has to be willing to assume responsibility for his or her own contribution to the state of the relationship, as well as what each will do to resolve the situation harmoniously.

Wrapping Up with the Theme 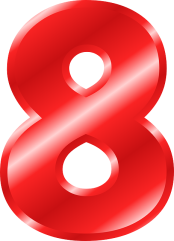 Adding 11 + 4 + 2 for the theme, we get 17, which reduces to 8. As a theme, 8 centers around personal power. The 8 theme can show that it’s time to get moving and put personal goals into action; it also shows a need to take control over life’s circumstances.

The 8 is also a number connected to the heart, as it’s associated with the circulatory system in the body.

In the context of this week’s reading, I’m seeing this as offering the thought that we have the power (8) to choose the thoughts (Spades) and feelings (Hearts) we circulate out to others in our world, as well as taking ownership of the thoughts and feelings we choose in reaction and response to those challenging moments with others.

And with that, I’ll bring this week’s reading to a close.

Hoping you have a wonderful week!