The Trouble with Nelle…

When I took up Lenormand, I committed to pulling three cards as a daily draw, in an effort to understand how the deck spoke to me through my everyday experiences.

After some time, I wanted to also do readings on situations that had nothing to do with me directly, especially if, at some point, I might work with the system for other people, much in the way I had been led with Tarot.

I didn’t want to do readings on celebrities or people I knew in my personal life, because I didn’t have their consent to look into their lives, so I chose people and situations from the TV shows I watch.

With Lenormand, specifically, I chose soap operas, one of my guilty pleasures. If you’ve been reading the blog for some time, you might recall the readings I did on situations with characters from Days of Our Lives, General Hospital, and Salatut elämät.

Now that I’m getting back into reading with playing cards, I wanted to do what I did with Lenormand; I pull three cards as a daily draw, but I also want to explore situations that don’t directly involve me, allowing the cards to speak to me in different contexts.

And again, I’m going to my guilty pleasure, the soaps, for inspiration—specifically General Hospital.

If you watch the show, then you’ll know there’s a character, Nelle Hayes (played by Chloe Lanier), who arrived in Port Charles with an agenda involving Carly Corinthos (played by the amazing Laura Wright).

To that end, Nelle staged a situation with Carly’s husband Sonny (Maurice Bernard) that has Sonny thinking he and Nelle slept together (they did not; Nelle drugged Sonny).

Well, this past week, Sonny got hip to Nelle when she made another attempt, by placing an undergarment in Sonny’s bedroom, in the hopes Carly would discover it. He found it first, and knowing Nelle was the culprit, he went to confront her. Woo-hoo!

A must-see moment on “General Hospital”: Sonny (Maurice Bernard) confronts and threatens Nelle (Chloe Lanier) for her attempt to wreck his marriage to Carly.

Can I just tell you how I sat on the edge of my loveseat watching the scenes between Sonny and Nelle, as he threatened her with “making her disappear” (he’s a mobster, after all) with sheer delight?

After Sonny left, Nelle was shown listening to a recording she had made of a conversation between her and Sonny, with Sonny saying how Carly could never find out what happened between them (which was nothing, but, again, Sonny doesn’t know that).

So I thought I’d look into this with the cards. Using the wonderful Origins Playing Cards (First Edition) by Rick Davidson, I asked, “Will Nelle manage to break up Carly and Sonny—even after Sonny threatened her?”

Queen of Spades, Jack of Spades, and 5 of Spades, from the Origins Playing Cards (First Edition) by Rick Davidson.

My first impression was “Whoa.” All three cards are from the suit of Spades, the suit of challenges, obstacles, blocks, and hurdles.

My question was worded in a way that could elicit a “yes-no-maybe so” response from the cards, and looking at them from that perspective, Spades always respond with a definite no. And there’s three of them.

But, given the nature of soaps (oh, the drama), I wanted to take a closer look at the cards. 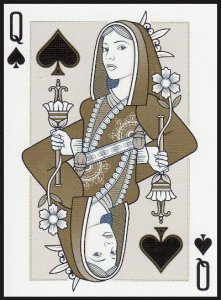 First, there’s the Queen of Spades, and she can represent a conniving, plotting woman up to no good, which is an apt description of Nelle.

Going further, with the Queen of Spades being followed by more Spades cards, the woman can be considered deceptive, cold and calculating, and emotionally controlled and detached.

And Nelle knows how to turn the “good girl” on and off; in her moments with Sonny, as he threatened her, she shed tears and talked about how “sorry” she was; but the minute Sonny left the room, the switch went off and you could see the calculating Nelle return (a credit to Lanier).

And I noticed, in the gorgeous image by Davidson, the Queen holds what looks like a flower—with the handle of a dagger protruding from it, symbolizing anger contained within something beautiful. Kind of like Nelle herself…

The next card in the line is Jack of Spades. When a Jack follows another face card of the same suit, this can represent thoughts. So, the Jack of Spades represents Nelle’s thinking.

Given that, the Jack of Spades can be the troublemaker, so there are thoughts about causing trouble for Carly.

Since the Queen and Jack aren’t facing each other (but notice the Queen glancing over her shoulder anyway?), the visual makes me think there are thoughts in the back of Nelle’s mind about how she can cause trouble for Carly.

Since they’re from the same suit, they can be considered family, leading me to the possibility of Nelle and Carly actually being related in some way, with the Queen being Carly (an older woman), and the Jack being Nelle (a younger woman). 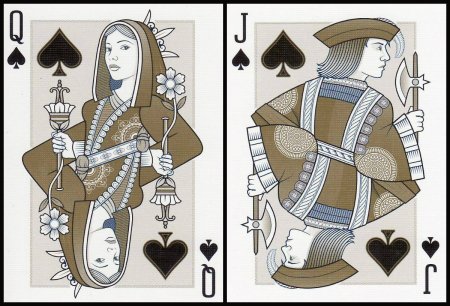 With the pair not facing each other, it sends the message of one not knowing about the other, as well as an estrangement of some kind.

Just as I did with the Queen, I looked at the image of the Jack, paying attention to the ax he’s holding; it brings to mind the expressions of “having an ax to grind” and doing a “hatchet job.”

And Jacks can be messengers, so I then considered the possibility of that recording somehow being delivered to Carly…

And that brings me to the last card in the line, the 5 of Spades.

The first thing I notice is the Jack of Spades is facing this card, which can suggest an unhappy person. And, while we, the viewers, don’t know the specifics, we do know that Nelle is unhappy with Carly—that much is clear.

The 5 is a number of change, so I see this as changes coming, sure to be painful.

The 5 also represents activity, and since a hand has five fingers, I see this as actively working on something, about “having your hand” in it, so to speak.

So, I don’t think Nelle is done, despite Sonny threatening her.

It will be interesting to see how this drama plays out. I’ll definitely keep tuning in…

As of March 9, 2017, here’s what happened (if you watch the show, and haven’t gotten caught up yet, you might want to stop reading now–this is your spoiler alert!):

Nelle decided to mail Carly a flash drive of the recording she made in which Sonny instructed Nelle not to say anything to Carly about their sleeping together (which they didn’t, but Sonny doesn’t know this).

After having to spend some time with Michael, Carly’s son, due to a snowstorm, Nelle wanted to undo what she set in motion with the flash drive, and went to retrieve it.

Bobbie, Carly’s mother, found out what had “happened” between Nelle and Sonny, and promptly told Carly. As a result, Carly went to Nelle’s apartment, letting herself in, and found a flash drive that had the recording on it–which she listened to.

Sonny arrived on the scene shortly thereafter, and then Nelle and Michael showed up, so the scene was set for the denouement.

Nelle (Chloe Lanier, left) and Carly (Laura Wright) face off during the reveal of Nelle’s plotting and scheming (well, almost all of it…)

It was revealed that Nelle is the biological daughter of the man that adopted Carly (so they are family, but not by blood). The story so far is that Frank (the father) abandoned Carly and then had another family, which is how Nelle comes in.

Apparently, Frank put a spin on what happened with him and Carly, and Nelle holds Carly responsible, which is why she set her sights on Carly and her family.

Even with all this, everyone still believes Sonny and Nelle slept together (Nelle’s still keeping quiet on that one)…