Getting a “Flash” of La Vera Sibilla

At the top of the month, I started a challenge on Instagram called #sibillaprile, in which the participants work on developing a stronger connection with La Vera Sibilla, an Italian deck used for cartomancy.

If you’re no stranger to this space, you know that I’ve shared my personal experiences with Lenormand and Kipper, both of which are systems of cartomancy (Lenormand being French, and Kipper being German). 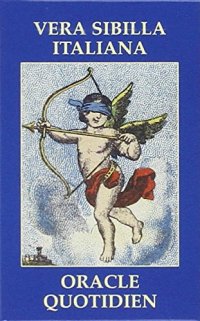 I had been on the fence about exploring Sibilla, but I decided to go for it, gifting myself the Every Day Oracle (La Vera Sibilla Italiana) deck for my 50th birthday last month (which is very fitting, as the number 5 can represent variety).

As I do with new decks when they arrive, I conduct an initial reading, asking what our relationship will be like (and you can take a look at that first Sibilla reading, as I posted it on Instagram here). And then I work with them daily, pulling three-card draws.

So, I was really excited when Søren (who goes by the handle @norsepagantarotwitch) shared that he was creating a Sibilla challenge for April, because it would help me with my learning curve.

It’s currently Day 3 of the challenge, and after I posted my three-card draw, I began thinking about what I could do to get clear readings with the cards, which would boost my confidence as a reader of Sibilla.

While brushing my teeth, I pondered this as a question to actually put to the cards once I was finished.

And, all of a sudden, in my mind’s eye, I see a flash of one of the cards from the deck: Disperato per gelosia (Consumed with jealousy).

The image has a man holding a gun to his head—not particularly the image you would want to come to mind to boost your confidence.

And then I heard the words, “Don’t force it,” which plays off the idea of “holding a gun to my head.”

And then, another image flash of a card, this one being Letterato (Scholar).

I have a particular fondness for this card, as it was one of the cards that appeared in that initial reading about my relationship with Sibilla. It can be read as a significator card, and I’ve adopted it to represent me ever since.

Scholar can represent study, and someone who’s educated and very knowledgeable.

Without missing a beat, Consumed with jealousy came back into the “picture,” placing itself before Scholar. I then heard, “Don’t let yourself get jealous or envious of those who know more about Sibilla than you do.”

I then considered Scholar to be possibly representing Søren, the young man heading up the challenge, as well as a reader who goes by the name Kapherus, a very accomplished cartomancer (who dazzles me with his playing card readings) who’s also participating in the challenge.

And that was it.

Once I finished brushing my teeth, I picked up the deck, and sat down to pull cards. I asked, “What can I do to get clear readings with the Sibilla, to boost my confidence as a reader of the cards?” I shuffled the deck, cut the cards, fanned them out facedown, and pulled three.

Still facedown, I turn over the first card: Consumed with jealousy. I gasp.

I turn over the second: Scholar. I gasp again, only louder, and I pull myself back from the cards. “What?!? Are you kidding me?!?” I say aloud, in total awe at what just happened.

As a card reader, it’s moments like these that remind me there’s some magic at work in life. I mean, you just can’t make this kind of stuff up. 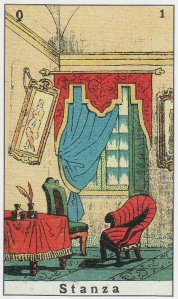 I turn over the third: Stanza (Room).

Room, for me, can represent an actual room, but I also see this card as meaning intimacy; this aspect tells me that forming an intimate connection with the cards will bring more clarity to my readings.

And I also read Scholar + Room to suggest making room for studying the cards, and having the physical space to read them.

So, I concluded the line to suggest, “Don’t force things (Consumed with jealousy) in your study of the cards (Scholar being both me and the study of the cards), but rather create the space (Scholar is also known as “Artist,” and Room) to form an intimate connection (Room) with Sibilla.” 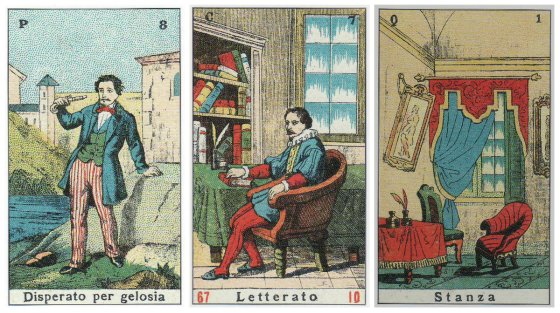 And I think that intimate connection is already starting to form. As the final card in the line, the Ace of Diamonds (Room), suggests a connection that will continue to evolve and develop.