To my (pleasant) surprise, last week’s playing card reading was very well-received, so I was inspired to do another one this week—with a twist. 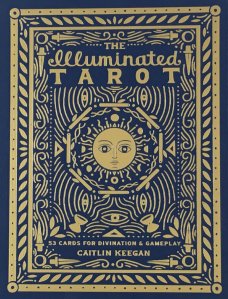 I wanted to work with my mad deck crush again (which is still going strong), and if you’re no stranger to the blog, you’ll know I’m referring to The Illuminated Tarot by Caitlin Keegan (and published by Clarkson Potter).

And you’ll also realize the twist: Even though this deck is considered a Tarot deck, it actually has a playing card deck structure to it; for me, it’s like getting the best of both my favorite divination systems rolled into one deck.

I’m taking the deck in hand, shuffling the cards, and asking the general question, “What do we need to know about the possibilities for the week ahead?”

After shuffling the deck, I pulled three cards for this week’s reading. 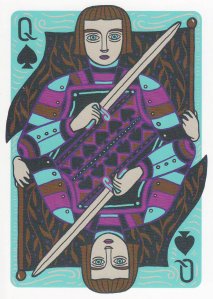 The first card, opening the reading up for the week, is the Queen of Spades.

The suit of Spades represents problems, challenges, blocks and obstacles, but when I see a card from this suit in the first position of a reading, it can suggest a problem on its way out, that it’s going away.

Numerically, the Queen is valued at 12, and reduces to 3 (12 = 1 + 2 = 3). Typically, the 3 is associated with increase and expansion, but when connected to Spades, I read it as the opposite, which in this case, would be decrease.

The idea of decrease would reinforce the possibility of a problem going away.

Decrease would fit another aspect of the Queen of Spades, as she represents the process of elimination; the Queen is a person who actively cuts out (she holds a sword) what she no longer needs or wants from her life, what’s no longer serving or supporting her.

This can be material things (she’s known for Feng Shui), but also people, as she can represent a person who’s divorced, separated, or estranged from others—which are all forms of being “cut off” from people.

As an approach card, she begs the question: What do you need to eliminate from your life—and would you be willing to take an action step toward that goal?

The Queen of Spades is said to have had it pretty difficult in life, and, as a result, can make things problematic for those around her. Going with this aspect of the card, it may be that we need to consider putting some distance between ourselves and difficult people this week.

The final thing that comes to mind with this card is that of decision-making. When it comes to needing to make a decision, this Queen approaches the process intellectually (Spades represent mental activity); she looks at the situation from all possible sides, angles, and perspectives, weighing the pros and cons, and seeking all the information necessary to make the best and right choice.

If you need to make a decision this week, consider adopting that particular approach.

Moving to the next card, we have the 4 of Hearts.

This is an interesting card to follow the Queen of Spades, as the suit of Hearts represents feelings, emotions, and relationships.

The 4 of Hearts is known as the “marriage bed” card, implying a certain level of intimacy in a relationship; if not a marriage specifically, then a serious and very close relationship.

And then the divorced, separated, or estranged aspect of the Queen of Spades would make sense; reading just the suit emblems, the pairing of Spades + Hearts could indicate a problem (Spades) in a relationship (Hearts), and that it’s creating emotional pain.

Going further, the emotions associated with the 4 of Hearts are discontent and dissatisfaction, leading to the need for evaluating—or re-evaluating—a situation.

If we consider the decision-making aspect of the Queen of Spades, the 4 of Hearts could indicate that help is on the way (the hand with the bouquet), and that we have to be on the lookout, so we can see it when it comes our way.

The three cups at the bottom of the card symbolize the things in life that can distract us and keep us preoccupied, like the problems associated with Spades; when we keep focusing on the problems, we can sometimes let the solution slip right by, unnoticed.

Making the shift from being problem-focused to solution-focused, and shifting the associated feelings, may be the thing that enhances our perception of the situation. 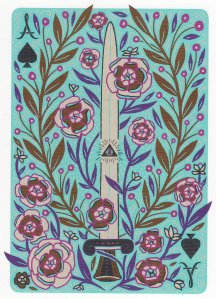 Moving on to our final card for this week, we have the Ace of Spades.

Here we have another card from the suit of Spades, bookending the reading this week.

Seeing this card here validates an earlier “point” that was made: When the Ace of Spades appears, it can mean a decision is being made.

It can also represent clarity (clear thinking and being clear-headed), and that an answer or solution to a problem is received.

The Ace of Spades can indicate a triumph, victory, or success is at hand.

Aces can represent the potential for a new chapter of life to begin; with the Ace of Spades in particular, this new chapter could get off to a bumpy start. If you’re starting something new this week, don’t let the proverbial speed bumps in the road along the way deter you, having you think you’ve made a wrong turn.

Keep moving forward—the bumps will work themselves out.

The Ace of Spades could be offering the advice to keep an open mind, as you might get a big idea, have an a-ha moment, or receive an epiphany that clears up all those hurdles and obstacles.

And that will wrap things up this week—wishing you a Tarot-tastic one!