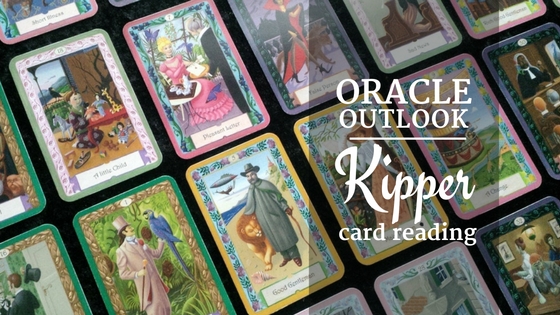 Keeping with the cartomancy kick I’m currently on (once again), I wanted to do a Kipper card reading for the Oracle Outlook.

So, for this week’s reading, I’ll be working with the Fin de Siècle Kipper Cards by Ciro Marchetti (while there’s now a mass-market edition of the deck by U. S. Games, I’m using my personally monogrammed copy of the first, self-published edition).

Taking the deck in hand, I’m shuffling the cards, asking what we might expect for the week ahead.

Just like I do when I read with Lenormand in this space, I’ll be working with a Line of 5 layout.

The focus card this week, which is in the middle of the line, is Marriage.

Marriage is a card of commitment, so we’re being asked to consider the people and things we commit to throughout the week.

Marriage, as a ceremony, consists of the parties involved making pledges, promises, and vows to each other as a way of setting intentions for the relationship going forward.

So, while Marriage could imply an actual wedding ceremony or the married life of a couple, in the more general sense, Marriage sends the message that this is a week to keep our promises and honor our commitments—both the ones we make to and for ourselves, as well as those we make to and for others (to the level best of our ability).

Looking at the cards immediately flanking Marriage, we have Bad Health and Imprisonment.

Bad Health is a card that can suggest a time for healing, a time of recuperation, looking at it from a physical well-being perspective. Traditionally known as “Short Illness,” it can suggest the condition is temporary in nature, as “short” is short for “short-term” (I really couldn’t help myself with that).

Bad Health can also appear when it’s time to take a break from things, from your normal routine.

If we consider Bad Health to be about taking a break (and, as I type these words, I’m hearing “Gimme a break, gimme a break,” the lead-in on those old Kit Kat bar commercials), then with Marriage, a possible message is that we may need to commit to our well-being by taking a temporary break from a long-standing or long-term commitment.

With a bed in the image on the card, I always consider the expression “putting an issue to read or to bed,” so we may need to commit (Marriage) to resolving an issue, even if it’s just a temporary measure at this stage.

And that would make sense as we consider Imprisonment, which is a card of limitation and restriction.

This card, in traditional Kipper, is simply named “Prison,” and I tend to read it like Tower in Lenormand; in that context, Imprisonment can talk about withdrawal, isolation, and being alone or lonely (think “solitary confinement” in the prison systems).

This aspect would then fit when paired with Bad Health, suggesting a solitary time out to heal, recover, recharge, and recuperate.

When we consider the pairing of Marriage + Imprisonment, a commitment or engagement may face some type of limitation or restriction. With Marriage being a card of a contract, Imprisonment might be a heads-up to take a close look at the terms of the agreement, to avoid any possibilities of getting “trapped” into a commitment that can’t be easily undone.

If one is healing and recovering from a challenging relationship or commitment, Imprisonment might then come up as a possible fear of commitment (think commitment “phobia”), in which there’s an underlying issue of becoming trapped or stuck.

Moving to the outer cards, we have High Honor and Mature Female. 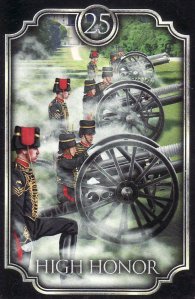 High Honor is a card of achievement and recognition, and I tend to read it with a slant toward career and career advancement.

Since the context of the reading centers on commitments and agreements (Marriage), High Honor might want to talk about the recognition of a particular commitment, or the achievement of a contractual agreement.

With High Honor being closest to—and facing—Bad Health, the pair might suggest recognizing it’s “high time” for a break, or that some type of healing is being acknowledged.

Mature Female, on the other side of the line, points to a person who may play a part in the situation being presented.

Mature Female points to an older woman, someone mature, who has gained wisdom through experience.

And she faces all the other cards in the line, suggesting things that are coming up for her in the future.

When pairing the outer cards (High Honor + Mature Female), they offer the possibility that this woman will be on the receiving end of honor and recognition, perhaps for something she will achieve.

That doesn’t mean there won’t be some challenges though toward that achievement, if we take into account that Imprisonment is the card showing up in her immediate future. She may, at first, face some limitations or restrictions starting out.

With Marriage following Imprisonment, it might offer that the woman might, at first, try moving forward on her own (Imprisonment is a card of solitude and being alone), but soon realize that another person may need to become involved, and the agreement to form a partnership is made.

Another possibility is that an older woman is facing moving beyond a limiting or restrictive commitment or relationship (Marriage + Imprisonment), and taking some time for herself to heal (Bad Health + Imprisonment), as she recognizes (High Honor) how important that is, and as a result of that recognition, she achieves her goal (High Honor).

And I’ll close out on that “high note.”

Have a great week!