Getting a Gift of Cartomancy

In previous posts, I mentioned that I’ve declared 2018 the year I would work more with playing cards personally, as I’m coming up on the 20th anniversary of the dream that set me on the path to becoming a card reader.

On July 7, 1998, I had a dream in which I was reading playing cards for myself, studying the cards on a table and taking notes. I woke up from the dream mystified, as I’d never worked with a deck of cards like that in my waking life.

In researching the symbolism of playing cards in dreams, I discovered that playing cards were related to Tarot cards, and that set the stage for me to begin exploring Tarot. And the rest, as they say, is history.

And as I immersed myself in Tarot, I had a follow-up dream, again with playing cards, and I realized I was supposed to also read actual playing cards too. And that was reinforced again when I took up Lenormand a few years ago, because traditional decks have playing card inserts, which I found totally captivating. And I wanted to find ways to work with them when reading Lenormand, so the interest in reading playing cards was sparked again.

Interesting things can happen when you make a declaration. In this case, a woman recently messaged me on Facebook. We weren’t “friends” on FB, so I didn’t know who she was when the message landed in my inbox. She wanted to let me know that she watches the video presentations of my readings, and asked if I ever read with the Petit Etteilla, a French cartomancy system said to be the original Lenormand.

I replied that I’d heard of the system, but I hadn’t delved into it beyond knowing about it. And then she made the offer to send me a copy of the Petit Etteilla in English (it’s traditionally in French, and only translated into English a few years ago)—for free, her gift to me. 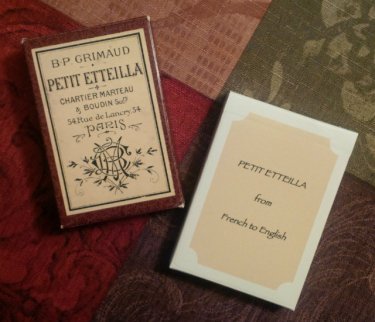 Petit Etteilla–both in French and in English

I thanked her for her generosity, and gave her my address. Within a few days, I was surprised to see a long, narrow box in the mail. In it, she had not only sent me a copy of an English translation of the Petit Etteilla—but also a copy of it in French, along with a drawstring bag, and some handwritten notes about the deck! The handwritten notes turned out to be very important, as there is little written about the Petit Etteilla in English.

How magical is it, that, just as I declare to deepen my playing card reading practice, a woman—who I never met or spoke to before—would offer to send me a French deck of playing cards?

The only thing I could say is that it was a sign.

So I spent some time looking over the notes to get some understanding of how to work with the cards, but I’m also a believer that experience can be the best teacher, so I decided to lay out a Line of 5 to read.

For the reading, I asked, “What can I do to learn how to work with the English Petit Etteilla?”

I shuffled the deck, making sure some of the cards were reversed (the system requires reversals). With the cards facedown, I cut the deck, fanned the cards, and drew 5 cards at random. The cards are placed right-to-left, and that’s how they’re to be read.

The first thing I noticed was the Etteilla card in the middle of the line. The Etteilla card represents the Questioner (Le Questionant), and is the deck’s way of saying things center on me, saying I play a central part in my learning to work with the system.

And this was random. You can’t make this stuff up.

The cards have writing on all four sides of the cards, and different meanings are taken into account when the cards are upright, reversed, or in multiples. 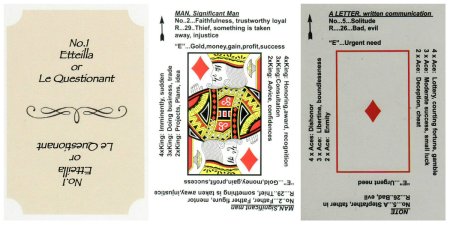 And it occurred to me what my kind gift-giver said in the notes she enclosed: She told me the papers were notes she’d taken when learning from her teacher—a man. And this man is well-known in Europe for his work with different systems of cartomancy.

I was perplexed by this word, and had to sit with it for a bit. And then I decided to look the word up in the dictionary for some ideas:

That helped me form this message: the practice of believing would help me in learning to work with the Petit Etteilla.

And the final card, 7 of Spades, has the meaning of hope. Paired with the Jack of Hearts, the cards are saying to believe and remain hopeful. I worded the ending in that manner because I personally read Spades as challenges and the 7 of Spades can mean setback and stagnation. 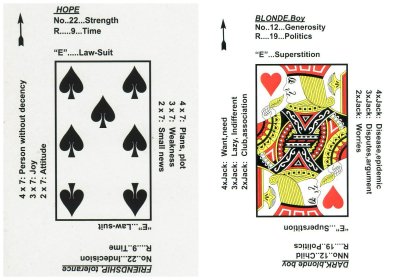 So my summation is written communication from a significant man comes to you, and through practice, you will gain hope. Basically, sticking with the notes I have (for now), practice doing readings with the cards, and remaining hopeful will be the things that will help me learn to work with the Petit Etteilla.

And the word superstition is a nice one to bring this to a close: In essence, I have to believe in the magic of the cards.

Oh, I think I can manage that…

James Himm Mitchell, the Dreamer and Visionary of LifePlan Coaching & Consulting, LLC, works as an intuitive life coach, with a focus on personal growth and development. His specialties are Dream Decoding, Oracles (Tarot, playing cards, and Lenormand), and Energy Medicine (Reiki), and he uses those modalities coaching individuals to create the tools and develop the strategies that transform their lives.
View all posts by James Himm →
This entry was posted in Personal Reflections and tagged 7 of Spades, Ace of Diamonds, belief, cartomancy, communication, dream, English, Etteilla, Facebook, French, gift, hope, Jack of Hearts, King of Diamonds, Lenormand, Letter, magic, Petit Etteilla, Playing Cards, supernatural, superstition, Tarot, writing. Bookmark the permalink.