The Arcana Tarot Playing Cards, by Chris Ovdiyenko, helped bring my year of cartomancy to a close–in a revealing way.

At the top of last year, I set an intention to honor the dream I had 20 years ago (the anniversary was this past July) that set me on the path to becoming a cartomancer.

If you’re new to the blog, I had a (sleep) dream in which I was doing a card reading for myself, using a deck of playing cards. I had never used a deck of cards that way in waking life prior to the dream, so I knew it was significant.

I looked up playing cards in a dream dictionary and the entry said that playing cards were related to Tarot cards. At the time, I hadn’t seen or heard of Tarot, so I started doing research on the subject, and, in time, purchased my first deck (which was the Crowley Thoth).

But because the dream specifically had playing cards in it, I wanted to go back to my roots, so to speak, in my ongoing personal study and practice of the cards (because Tarot is the main divinatory tool I use in my work with clients).

And to reinforce the intent, The Universe got in on the act by having people, over on YouTube, ask me to share the meanings I use when I read playing cards, much in the way I did with both Lenormand and Kipper previously.

It was a great time with the cards. I got a number of new decks throughout the year, testing them out to see which seemed to be great for readings, and some really surprised me with their spot-on accuracy in my daily draws.

And, as the year moved closer to its end, an interesting thing happened.

A viewer, who had been keeping up with the cartomancy series I mentioned earlier, sent me an e-mail, first saying how much she was enjoying the series, and expressing hope that I would continue (my posting frequency had slowed due to the busy-ness of life).

Then came the question: “Do you read the Tarot de Marseille?” 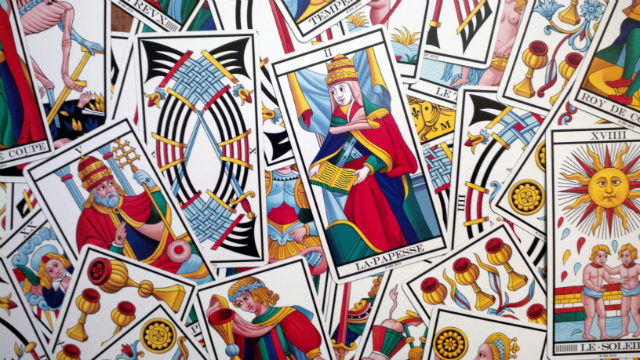 Cards from the ISIS Tarot de Marseille by Tadahiro Onuma.

She thought, with the way I read playing cards, I would work well with it.

I had considered it a long time ago, and the only deck that appealed to me back then was the ISIS Version Tarot de Marseille by Tadahiro Onuma, a Hermetic philosopher based in Japan. This was in 2010, when that deck was first published.

The question got me thinking about the deck, which I hadn’t given much thought to in the 8 years it’s been available to the public.

What to do…? I decided to take this to the cards, of course. I grabbed my copy of the second edition of Arcana Tarot Playing Cards by Chris Ovdiyenko (produced by Dead on Paper), sitting down to do an Answer Spread with this question in mind: “Is it time for Tarot de Marseille?”

In response, the cards that turned up were: The Magician, Page of Diamonds, The Sun, 3 of Clubs, Jack of Hearts, and 6 of Clubs.

Representing the situation were The Magician and 3 of Clubs.

The Magician, being a Major Arcana card, starts things off by pointing out the question being posed to the cards is significant, that it speaks to an important event being ushered into my life.

The Magician also is a card that talks about talent, skill, and ability—as well as specializing with a particular “tool of the trade,” and Tarot de Marseille would fit that bill.

Following that up, 3 of Clubs can mean the growth and development of work; this card talks about expansion and broadening one’s horizons.

Both also hint at the possibility of working with Tarot de Marseille in my business with clients, so that was interesting to see.

Answering the question directly were Page of Diamonds and Jack of Hearts.

Page of Diamonds is the card, for me, that can represent the student and the scholar—this alone says that it would be worthwhile (or worth my while; Diamonds) for me to study (learn) Tarot de Marseille.

This Page is one that offers “valuable information” (as Pages are messengers), so the card implies that is what Tarot de Marseille would bring to me.

And the Page is facing The Magician, which only adds to what each card has to say.

Jack of Hearts is a personal card, because I have assigned it my sun sign (Pisces), so, like The Magician, this was significant (a pun on significator) to see.

In addition to that, one of the meanings I have for this card is an interest in—and focus on—divination, again keeping with the context of the question.

Moving to the last column, which reveals contributing factors connected to the situation, there’s The Sun and 6 of Clubs.

What is there to say about The Sun, aside from it being the best card in the deck (in my personal opinion, of course)?

It’s a definite yes—it’s time for Tarot de Marseille. The Sun suggests the experience promises to be both enlightening and illuminating.

And bringing this reading to its close, in the pivot card position (a type of secondary answer, if the cards in the answer column aren’t clear), is the 6 of Clubs.

And the meaning that fits the context here is this: the act of reading (because this card can reference books, but cards are also read).

The Sun + 6 of Clubs could be read to say “Illumination and enlightenment come from the act of reading.”

It’s like The Sun is saying to me, “Could the answer be any clearer?”

Having my answer, I went ahead and ordered a copy of the ISIS Tarot de Marseille. It arrived a few days before Christmas, and I’ve been enjoying the bonding process, discovering how it “speaks” to me (which is another aspect of 6 of Clubs: communication).

And I became aware, through this experience, that my year of cartomancy came full circle: it brought me back to Tarot in a new way.

It will be interesting to see how this journey with Tarot de Marseille unfolds—especially with this year marking the 20th anniversary when I purchased that first deck of cards and became a reader (which happens next month).

2 Responses to My Year of Cartomancy Comes Full Circle