Assisting me with this week’s reading are the Fairy Tarot Cards by Doreen Virtue, Radleigh Valentine, and Howard David Johnson.

My reasoning for the deck selection is two-fold: The first is that I think the magic of the fairies is like the magic of Christmas; and the second is that the suits of the deck are named by the seasons, and this time of year is referred to as the holiday season.

So, with deck in hand, I’m shuffling the cards with this question in mind: “What do we need to know about the week ahead?”

After shuffling the deck and pulling the three cards for this reading, I turn the remainder of the deck over to look at the card at the bottom, which I consider the foundation for the week.

The card is 10 of Spring, and when it appears on your “to-do” list, it warns of having too many responsibilities; this card is rather appropriate, considering many of us will be celebrating Christmas this coming Friday.

There may be lots of responsibilities, like last-minute shopping for presents, honoring commitments to Christmas parties, and fulfilling familial obligations as to who’s coming here or going there on Christmas day. Whew!

You may be feeling–like the fairy woman on the card—that so many responsibilities are falling to you; some of these “tasks” may involve the coming holiday, and some may have nothing to do with it at all. But do all those responsibilities (really) belong to you? If not, 10 of Spring is asking you to consider allowing other people to be responsible for themselves. You’re not to carry the weight of the world on your shoulders!

You may be thinking you’re being helpful, but are you really? This card warns that you may be enabling other people not to take care of their own situations in life—especially when they are able and capable. If that is true for you, why is that?

In working environments (Spring being the suit of work and business), 10 of Spring can suggest having new job duties and responsibilities. It can suggest you are in a position where a lot of work is put upon you.

People around you may be calling you a workaholic (which actually happened to me when I was out in the working world—and I was in denial about it). You may also believe you have to do it all yourself (yep—me again). If this is true for you, 10 of Spring is cautioning you: If you are not careful, you will experience exhaustion and fatigue, and put yourself on the road to burnout (which wound up happening to me).

It’s not too late to learn the art of delegation—which is really learning to let go of control. Not everything has to get done by you—whether you believe it or not. It’s a matter of acknowledging that things may not get done the way you would do it—and that’s because not everyone works the same way you do, or has the same motivations about the work as you (the suit of Spring being about motivation).

Sometimes we think holding on to everything gives us control. But does it? It may very well be that those things we are holding on to are really controlling us.

Moving now to the three cards I pulled: the first for the beginning of the week; the second for the middle of the week; and the last to round out the rest of the week.

Your Week in Tarot: 3 of Autumn, 6 of Spring, and 3 of Summer, from the Fairy Tarot Cards. 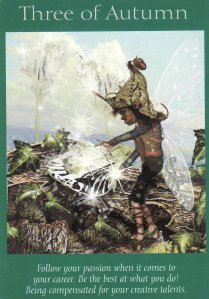 For the beginning of the week, we have 3 of Autumn. When this card appears, we may be creating a plan (perhaps for all those things we need to work on to get through the week) and then putting that plan into action.

That’s one possibility. Another message of 3 of Autumn is to put your focus and dedication into mastering your craft. This is one of the “work” cards from the suit of Autumn, and it’s a notice that success can be attained through focus and hard work (10 of Spring).

It’s a positive card that says progress will be gradual (work-related or not)—and it urges you to put your creative talents (the number 3 is the number of creativity and self-expression) to good use. Our friend on the card is using his talents wisely and creatively, and is gaining a quiet and solid satisfaction from his work as he advances in his craft.

Being a work card, this is a card that can suggest self-employment or work that builds into a long-term career (this is a good card that can indicate promotions and moving up the ladder).

Whatever the profession, 3 of Autumn is a solid indication that you have a reputation for the skill, talents, and abilities you possess (this is a card of having your work noticed by others).

It may be time to get into a formalized study program, as 3 of Autumn can indicate getting the education and training needed and obtaining a certificate or diploma.

Whatever the plan, now is the time to perfect your craft.

Keeping with the idea of family and spending time with family over the holiday, 3 of Autumn can come up when there’s a need for make room or create space for a child (which might be a newborn baby for expectant parents or making room for an adult child staying with his or her parents). 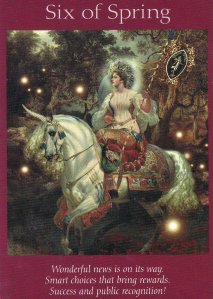 Moving to the card for the middle of the week, we have 6 of Spring.

When 6 of Spring gallops into your week, expect a breakthrough! This card is about triumph, victory, and success. You may receive all sorts of praise throughout the week. Accept them when they come! 6 of Spring is all about achievement, recognition, rewards, support, and being applauded for your efforts!

With 3 of Autumn being a card of work and career, 6 of Spring can be about finding the work that is rewarding to you. You may have a strong need for recognition in the job or career you work in. When 6 of Spring appears, it can mean taking the actions that will advance your career (the horse moving symbolizes advancement, as well as having the horse and rider actually facing the direction of 3 of Autumn).

6 of Spring can also be a card of support, which would reinforce the message of 10 of Spring regarding seeking the help and support of others to minimize the load you might be carrying.

And keeping with the upcoming holiday, 6 of Spring is a card of travel, so keep in mind what the roads might be like for all your commutes this week. The 6 in Tarot is a number of choices, so you might want to plan (3 of Autumn) accordingly, and make some wise choices (6) regarding your regular routes, and consider some alternates. If not, you could find yourself in spots where traffic is moving slowly (3 of Autumn being gradual progress)—and as a result (3 being a number of results), throws some of your plans (3 of Autumn) off-kilter.

Coming to the card for the end of the week, we have 3 of Summer, a card of celebrations, good times, and social events, which is very appropriate given this is the week of a holiday.

Some see this card as an invitation to a wedding or a baby shower (remember I said 3 of Autumn can be making room for a child). I see 3 of Summer as being a party that will have food and drinks, music and dancing. It can be a girl’s night out, a night the guys decide to hang, or a group of friends getting together. Be on the lookout for a possible invite!

3 of Summer can also suggest people who have a mutual hobby or interest, and have formed a club or some other way to get together socially. These days, that can be a Meet Up group or one of the many groups you’ll find on the many social media platforms we have these days. How can you share what you are enthusiastic about with others this week? Is there a club or support group you could become a member of?

At any rate, this is a card of networking socially. Connections are made by “knowing someone who knows someone.” But, in order for you to make those connections, you have to get out there and be a part of the scene—to be seen!

Whatever you do this week—take some to go out and have some fun! Especially if you can be like 10 of Spring, which, in part, reads, “All work and no play.” It’s time to bring in some balance, baby!

To round out this reading, I’ll take the numbers on all the cards, reducing them to a number between 0-22, seeing what Major Arcana card will be the Lesson card for the week.

Awakening is a card that can indicate a period when it appears things are in limbo. It’s a card of setbacks, delays, and things being put “on hold.”

If this is true for you, this is an opportunity to practice the lesson of this card, which is perspective. The fairy on the card is doing a handstand, putting himself in a position that allows him a different way of seeing things.

This week, Awakening is encouraging you to consider how you can see the people and events in your life in a different light (symbolized by the nimbus of light around his head, which is enlightenment). Part of that process is coming to a place of acceptance–being willing to say, “This is the way it is,” which then leads to the art of learning to let go.

This art of letting go is known as sacrifice. Awakening, a card of sacrifice, says the act needs to be voluntary. We have to get to a place of being willing to let go. But we can, at times, have a negative connotation of sacrifice.

There’s a quote, from author Mark Nepo, about sacrifice I especially like: “Sacrifice is giving up what no longer works.” With this different perspective on sacrifice, how does that help you consider what is no longer working for you—and would you be willing to give it up?

Another possibility with Awakening is that it’s a card about being different, being unique, and marching to the beat of your own drum.

The number 3 has been repeated twice in the reading (3 of Autumn and 3 of Summer), and is repeated again with this card (12 = 1 + 2 = 3); 3 is a number, for me, that can represent finding one’s “voice.” Each of us has a singular voice, with a message that is uniquely ours and ours solely to say.

Sometimes, though, when we choose to stand in that, and speak what is true for us, others around us may express discomfort with our expression. Their discomfort can come in the form of this question: “Why can’t you be like everyone else?”

Awakening says for you to be you. Awakening also says to not retaliate against those who would rather you conform (it is a card of inaction), but rather consider how you could see things from their perspective (whether you agree with them or not), so you might be better able to understand where they might be coming from (the yin-yang symbol at the fairy’s foot).

And how is this for perspective: Just as you would want for others to accept you being who you are, you must also accept and allow others to be who they are.

And this might be the greatest lesson of all, especially when we get together with others this week to celebrate the holiday.

And, on that note, I wish you a Merry Christmas and a Happy Holiday!