It’s the start of a new week and that means it’s time for a new weekly card reading! Once again, we’re going to the table with the Lenormand; these readings continue to be met with a great response, and I want to thank everyone who has read the blog posts, watched the videos, and taken the time to send messages of encouragement and support my way. You all have been so wonderful and it means more than I can say.

Now, taking my copy of the Piatnik Lenormand, I shuffle, cut, and fan out the deck, pulling cards for what’s known as a Line of 5 (it’s also known as the Answer Spread), with this question in mind: “What do we need to know about the week ahead?”

The cards for our reading are Letter, Key, Fox, Lilies, and Cross.

The outlook for the week: Letter, Key, Fox, Lilies, and Cross, from the Piatnik Lenormand. 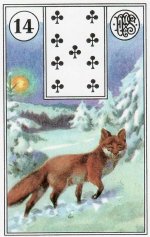 Starting with the middle card, as it is the focus of the reading, we have Fox, which suggests the focus is on being clever, work we need to do (this is a work card), a skill we need to employ (a pun for “employment,” bringing it back to work) or develop, or something we need to take advantage of. Fox is a card of having—or needing to have—a strategy of some sort.

Moving to the cards flanking Fox next, we have the pair Key + Lilies.

Key is a card that refers to an answer or solution, a discovery, a breakthrough, or a revelation. Since keys unlock things, allowing us access, Key can mean unlocking something or being granted some form of access.

Lilies is a card of peace and protection. Lilies can refer to something old; in reference to people, this card can represent an elder, someone in a position of seniority, or a mentor—someone who may have some wisdom gained from experience.

So, the pair of Key + Lilies can indicate protecting something important or vital, as well as an answer or solution that brings some peace.

With Fox as the focus, Key + Fox + Lilies could mean an answer or solution (Key) to survive (Fox, being a card of survival) retirement (Lilies can also mean retirement, when connected to a work-related question/situation).

Moving to the outer cards on each end, as the next pair, we have Letter + Cross.

Letter is a card of news and messages, typically some form of written correspondence. It can represent some paperwork or a document, or something being “documented.”

Cross is a card of burden, difficulty, a crisis, or an ordeal. It can mean grief and suffering as a result. Cross can indicate something critical and necessary. I tend to see it as a spiritual card, because of my association with a cross as a religious and spiritual symbol.

So, the pair could be read as a spiritual message, or a critical/necessary letter or document. Receiving this piece of news may lead to a burden, difficulty, or an ordeal we must suffer through.

Looking to the pair of Letter + Key, to the left of Fox, I read as an important letter or document. Fox can also be a card of investigation, so this letter or document may be something of an investigative nature (some type of inquiry), and will require some form of response (Playing on Key being an answer). Or, going with Fox being work, Letter + Key+ Fox could mean a message (Letter) containing an answer (Key) about a work-related situation (Fox).

Moving to the pair on the opposite side of Fox, we have Lilies + Cross. There’s an interesting dichotomy here, as Lilies represents peace, while Cross represents suffering.The pair could indicate a spiritual experience, a difficult experience, or maturity through difficulty. If Fox is work, and Lilies is retirement, then the pair might suggest retirement (Lilies) becomes difficult (Cross). Keeping with retirement, and Lilies also meaning an elder or senior, then the pair could mean difficulty (Cross) for an elder or senior (Lilies).

The entire line, going from left to right, could be read as “A message (Letter) of an important (Key) strategy (Fox) to protect (Lilies) an elder (Lilies again) from an ordeal (Cross).”

With Fox, though, be careful with the message—Fox can also mean being taken advantage of, and that could mean that the message may be a scam or a con. Make sure you investigate (Fox, in the positive sense) if necessary (Cross).

I’m adding this advisory because of something I experienced just last night—which happened after I did this reading and posted the video portion to my YouTube channel.

I received a friend request on Facebook from a senior citizen I know (who just happens to be a retired minister, which is Lilies + Cross). After confirming the request, she sent me a message saying that she received $150,000 from UPS, and asked me if I had received the same. When I inquired further, she said that my name was on a list she had seen. She then asked me if I knew a particular man on Facebook, and that the money was through him.

As I chatted with her, I checked out the guy’s Facebook page, and grew more suspicious with what I saw.

Sensing this was a scam, and that my friend’s account had somehow been hacked, I quickly ended the chat and blocked “her.”

So, that’s how my week started.

And with that, I’ll bring this first part of the reading to a close.

As I’ve done previously, I’ll share the other techniques I use in a Line of 5—which involve the pips (the playing card inserts) on the cards.